Elder Quentin L. Cook and his wife, Mary, along with Elder Gary E. Stevenson and his wife, Lesa, and other guests ceremonially turn the dirt at the Smithfield Utah Temple groundbreaking ceremony in Smithfield, Utah, on Saturday, June 18, 2022. (Courtesy: The Church of Jesus Christ of Latter-day Saints)

SMITHFIELD — After more than a year since its announcement, construction officially began for the Smithfield Utah Temple Saturday morning as leaders of The Church of Jesus Christ of Latter-day Saints held a ground breaking ceremony. Elders Quinton L. Cook and Gary E. Stevenson, members of the Church’s Quorum of the Twelve Apostles, were both in attendance and participated.

Elder Stevenson said it was no coincidence that he and Elder Cook, who both grew up in Cache Valley, were asked by the First Presidency to conduct the ceremony. He noted how residents here have a strong respect for their ancestors, especially those who were pioneers and crossed the plains to settle the area.

“We remember and honor our ancestors by name through the work that is done in temples,” said Elder Stevenson, “even this Smithfield Utah Temple to be constructed. Our theology suggests no nobler gesture, no greater gift, than that of sacred ancestral temple ordinances, tying our hearts to our ancestors.”

He noted that the Smithfield Temple will be the 26th in the state. There are 172 dedicated temples worldwide in operation, with two more opening this weekend in Hong Kong and Cape Verde. It is estimated that 85 percent of the Church’s membership lives within 200 miles of a temple.

Elder Cook said the 2020 Census of American Religion showed 64 percent of Cache County residents are members of the Church, the second highest percentage in the state. He expressed appreciation for the early valley settlers and their dedication in establishing the communities here.

“I love this beautiful valley,” said Elder Cook. “I have seen much of the world but this peaceful valley, surrounded by these majestic mountains always feels like home to me. It is among the most beautiful places on earth.” 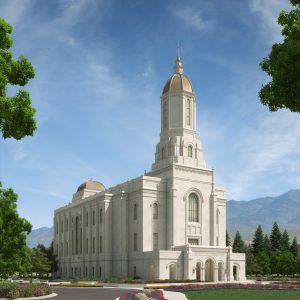 Plans call for a three-story structure of about 81,000 square feet. It will be built on a 13.3-acre site at the intersection of 800 West and 100 North, south of Birch Creek Elementary School and northwest of the Blue Sox baseball fields.

In November 2021, the Church released a rendered drawing of what the exterior will look like. The illustration showed the light-colored temple will have a similar look as the Logan Temple, including round arches over the entryways and top floor windows. One other noticeable similarity is a single bulkier spire without the gold covered statue of an angel that the Church identifies as Moroni. The statue occupies a prominent place on many other temples throughout the world—symbolizing the restoration of the Church.

During the dedicatory prayer, Elder Cook expressed a desire that the temple will be a “beacon light” to the communities of northern Cache Valley. Also that it will be a source of peace, hope and joy.

“Please bless old and young alike,” prayed Elder Cook, “that they will prepare themselves and seek out their kindred dead. We pray that for the members, this will be a time for renewal, recommitment and preparation.”

Attendance at the groundbreaking ceremony was by invitation only, limited to around 500 residents and special guests. The proceedings were also broadcast to members in the temple district.

See a photo gallery of the day’s events: Ceremonial shovels on display at the Smithfield Utah Temple groundbreaking ceremony in Smithfield, Utah, on Saturday, June 18, 2022. (Courtesy: The Church of Jesus Christ of Latter-day Saints) Elder Quentin L. Cook of the Quorum of the Twelve Apostles shares his remarks at the Smithfield Utah Temple groundbreaking ceremony in Smithfield, Utah, on Saturday, June 18, 2022. (Courtesy: The Church of Jesus Christ of Latter-day Saints) Church president announces temple to be constructed in Smithfield