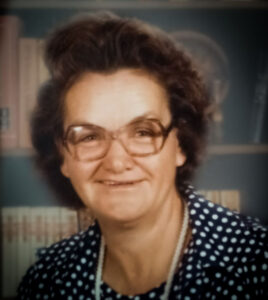 Our loving Mother, Grandmother, friend, Glenna “Maxine” Jensen Johnson, 95, passed away peacefully at her home on November 16, 2021, due to complications of illness. She was born at home on October 21, 1926 in Holbrook, Idaho, to the parents of Henry Andreas Jensen and Elvira Caroline Mortensen.

Maxine was a very loving and generous person. She loved all of her children, and grandchildren very much. She was also very accepting of others who came into her life. She always had a very positive outlook on life, and was very fun to be around. All of her grandchildren loved her very much. They always enjoyed their time out at grandma’s house, especially sleepovers with the cousins.

She was the 12th of 13 children. Their family moved to Oxford, Idaho when she was 12 years old. There she lived until she married. She started school at the Nelson school, 2 miles away from their home. She sometimes attended the Holbrook school that was 3 miles from their home. She walked, rode a horse, or was taken by car to go to school. When she went to 2nd grade, the teacher, who soon became her sister-in law, didn’t want to teach 2nd grade, so she was placed into 3rd grade instead. She learned to play the harmonica and the accordion. She was in a harmonica band at school and they would perform at different schools.

She graduated from the 8th grade in Oxford as the only girl in her class. She attended high school in Downey, Idaho. She graduated in 1943, being only 16 years old. She went on to Ogden Business College that fall. She went for a semester and then went to work at the 2nd Street Army Supply Depot. She worked there until her brother Henry Jr. was drafted in the army. She then came home to help her dad on the farm.
Maxine met her husband Frank Johnson at a dance and a courtship ensued. They were sealed in the Logan Temple on June 28, 1946. They were blessed with 16 children, 13 of whom who lived to adulthood. She had 3 sets of twins, with each set of twins being born 10 years apart. They taught their children the value of hard work with all of the work that needed to be done on the farm. She loved being a mom and did a great job providing for all of her children. She was a great homemaker.

She was a devout member of the Church of Jesus Christ of Latter-Day Saints and served as a Nursery leader and a Cub Scout leader. She was also consistent at doing indexing every week. She loved to garden, sew, knit and crochet. She loved hiking in the hills with her grandchildren, cookouts, Thanksgiving and Christmas times together, as well as Family Reunions.

Interment will be at the Preston Cemetery.