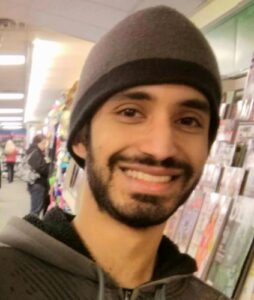 Seth Daniel Merck died from self-inflicted injuries on Oct 27, 2021 in Richmond, UT. His story’s ending was the result of a lifelong struggle with chronic depression and difficult circumstances. Yet, the worth of his character and life comes, not solely from a brief time towards the end of his journey, but the grit and decency woven throughout his life.

Seth was born Sept 12,1989 in Kolkata, India. He was a fighter from the start, almost two months premature and only 3 pounds. He not only survived, he thrived and in the summer of 1991, he was adopted by Dan and Bonnie Merck of Logan, UT. He spent his childhood in a small community of close friends. Music was always an important part of Seth’s life and he enjoyed playing guitar from his teen years onward. He always looked up to his father, and as a result, he was an incredibly hard worker. He was employed at Schreibers Food at the time of his death.

Seth married Lola Contreras, his high school sweetheart, in August 2012 in Logan, UT. As time passed, they grew apart and divorced in 2019. They had no children. Seth lived his life without reservations, filling up his free time with many interests. He found peace in the outdoors, he spent much time off roading with his friends. He was vested in bettering himself, and enjoyed working out and learning how to further his fitness. He was proud to train and complete a full length Spartan Race in 2018.

Collecting guns was a passion and he would often go target practice with others. He had a clever mind, enjoying wood working, World War II history, and video games. He was loyal to his family and friends, having a group of close knit friends through many years of adventures. Most memorable was his wit and common sense, that often combined to make him the go to for advice among his peers.

Seth is survived by his parents, Dan & Bonnie Merck of Logan, his sister Tess (James) Eby of Nibley, many aunts, uncles & cousins, and two nieces that adored him.

Our lives will never be the same. Seth, we will miss everything about you, from the little, everyday moments of sending you a meme, to the big moments when you were there for us, a protector, always fighting for those you care about. You were always so strong, you never hesitated to go after what you wanted. We are grateful you have found peace and we are so fiercely proud of you. With all the love from your family & friends, until we meet again.

A service for Seth will be held Nov 5 at 2pm at Cache Valley Mortuary (Hyde Park).