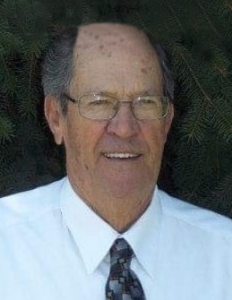 Grant was in the Airforce from November 1963 – 1967. He was honorably discharged as a Sergeant E-4. He began as a B-47 mechanic, later becoming a crew chief on C-130 making 20 different flights into Vietnam. One of his fondest memories was serving with his good friend Steve Huggins.

After the Air Force, he worked as a truck driver for Wendel Welling. Wendel sold it to IFA where Grant worked for the next 43 years. During his time with IFA, he managed a grain elevator in Soda Springs, ID. followed by managing the retail store in Tremonton for most of his career. During his time at the store, he grew the fertilizer business and feed commodity business which both had to branch off because of growth. Grant thrived off of serving the farmers and ranchers in our area. This was the highlight of his adult life. Grant retired in 2003 from IFA Tremonton/Garland.

He also had a love for the outdoors investing time in teaching his sons to hunt and fish while camping in our area and Southeast Idaho. We thank the farmers and ranchers in our county for allowing our family to make lasting memories on your land.

He was a member of The Church of Jesus Christ of Latter-day Saints.

Grant is survived by his sons, Jeff (Jenni) Adams of Corrine, Utah, and Ryan (Jessica) Adams of Tremonton, Utah; eight grandchildren and three great grandchildren; many nieces, nephews, and cousins.

He was preceded in death by his sons, Craig Earl Adams and Martin Lance Adams as well as his parents and eight siblings.

A special thanks to the wonderful staff at Bear River Valley Hospital and our amazing community for all the love and affection they have shown.

In lieu of flowers, we have set up a Memorial Fund to help with funeral expenses at Key Bank in Tremonton, Utah, or you can venmo @Ryan-Adams-1975.