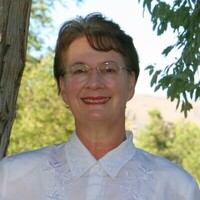 Bernice Nell Nalder age 74 returned to her heavenly home on her birthday October 28, 2021 after an extended illness. She was born October 28, 1947 in Idaho Falls, Idaho to Merritt Daryl Neibaur, and Maurine Randall Neibaur. She was the oldest of 7 children.  Bernice grew up at Green Canyon Hot Springs swimming resort near Newdale Idaho.  She taught swimming lessons and helped operate the family business.  She graduated from Sugar-Salem High School in 1966.  After high school she attended Ricks College and BYU in Provo.  She then received her master’s degree in nutrition from Utah State University in 1971, the same year she met and fell in love with her husband Larry Nalder.

Larry and Bernice were married in the Idaho Falls Temple on September 8, 1971.  They recently celebrated their 50th wedding anniversary.  Following Larry’s education, they moved to Holbrook where they raised their 6 children.

Bernice loved to cook and became known for her delicious food especially her cinnamon rolls.  There was always plenty of food on the table for her family and anyone that showed up.  If anyone left hungry it was their own fault.  Bernice grew a large vegetable garden each year and became a master gardener from her experience and willingness to try new methods.  She loved her high tunnel greenhouse to extend the growing season.  Her greatest satisfaction was sharing her garden produce with family, friends, and neighbors.   Each year she would grow cucumbers from which she would make dill pickles.  She was affectionately known by her grandchildren as the “pickle grandma”.  Last year she canned over 40 pints of dill pickles.  The grandchildren would always eat a couple of jars of pickles each time they came to visit.  Each year Bernice would freeze or can hundreds of quarts of fruit and vegetables.

She was active in The Church of Jesus Christ of Latter-Day Saints and served in various callings in the Holbrook Ward.  Her favorite calling was the Cub Scouts where she served as Den Leader, and Cub Master for over 25 years.  She attended Wood Badge and received her Silver Beaver award.  She spent countless hours planning to make Cub Scouts fun whileachieving their rank advancements. Over the past few weeks several former Cub Scouts have called Bernice and thanked her for the good positive influence she had upon their lives. Bernice always planned her schedule so she could watch the grandchildren in their sports, music and dance activities.  She was their best cheerleader.

Bernice served with her husband Larry on two full time missions for The Church of Jesus Christ of Latter-Day Saints to Nauvoo, Illinois and Palmyra, New York.  She cherished the missions as highlights of her life. Both missions gave her the opportunity to meet many wonderful people which became lifelong friends.While in Palmyra NY she had the special honor to grow a historic vegetable garden on the Joseph Smith farm for two summers. She shared the food raised with fellow missionaries.The most recent calling that gave her much fulfillment and gratification was serving as Family History consultant in the ward.  She spent countless hours researching her family line and sharing the family names with family, and cousins that could take names to the temple.  Bernice and Larry served as ordinance workers in the Logan and Brigham City Temples.  Bernice planned and carried out many temple excursions with the older grandchildren to do baptisms for the names she had researched.  Soon after the temples opened up after being closed down due to Covid, Bernice scheduled several opportunities to do ordinance work.  However due to her illness the appointments had to be canceled.

Bernice was very kind and compassionate, always giving praise and encouragement to her family and others.  She loved ministering to her assigned Relief Society sisters by serving or giving gifts and treats each month.

Funeral services will be held on Saturday, November 6 at 11 a.m. in the Malad LDS Stake Center. Friends may visit with the family at the church on Friday evening from 7-8 pm and from 9:30-10:30 am prior to the service on Saturday.