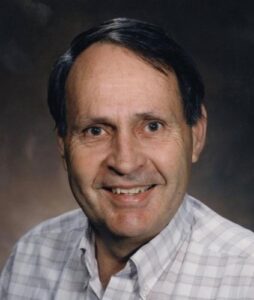 Kay Dayne Baker passed peacefully away on October 18, 2021. We are saddened but grateful knowing that he will be greeted by many loved ones there, especially his wife, Carolyn.

Kay was born in Escalante, Utah on January 31, 1934, to Otto Leroy and Freda Durtschi Baker, but spent his childhood on south West Temple in South Salt Lake. He graduated from Granite High School in 1952 and attended the University of Utah, earning his BS (1956), MS (1957), and PhD (1966) in Electrical Engineering and Physics. He spent his career as a professor and researcher first at the University of Utah and then at Utah State University, becoming a co-founder of the Space Dynamics Laboratory.

Kay married Carolyn Smith on April 8, 1955 in the Salt Lake Temple. His devotion to her in her final years set an example for everyone. He was a kind-hearted and compassionate person. He inspired those around him in a humble, unassuming way. Despite being stricken with a debilitating disease in his later years, he never complained (well, except when it came to sports or politics).