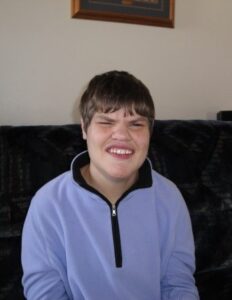 Chirelle M. Yarger joined her father on October 21, 2021 just 12 days after he went to Heaven. Chirelle was born March 27, 1980 to Rex and Verna Yarger in Brigham City Utah. She was one of 6 children. She was preceded in death by her brother Steven, nephew Sawyer, and father Rex Yarger. She is survived by her mother Verna, her Sister Wendy (Mark) Osmond, Kevin (D.J.) Yarger, Sheila (Steve) Roche, Krystal (Jeff) Forsgren, and Danyel (Dustin) Anderson.

She passed away after a long life of struggles and limitations. She faced multiple, severe handicaps and required help with nearly every aspect of her life. Yet given those conditions, she blessed the lives of everyone around her. Everyone in her family learned to accept disabilities and handicaps in others and see them as just another person. She attended school in the Box Elder School District. Her excitement in this participation was demonstrated by her flapping her arms like a bird which gave encouragement to everyone around her. Students who acted as her aids learned to love and respect her even with the differences. These students remembered her years later and the impact that Chirelle had on their lives. When she graduated from high school, she received a standing ovation with everyone on their feet in honor of her struggles and successes. Although she had to be assisted across the stage, she had never the less been admired and accepted by everyone who stood for her successes. Chirelle left lasting impressions upon those that had associations with her. Countless people remembered the lessons she taught them even after years have passed. Her accomplishments were small but her influence was great.

As she often did, she flapped her arms like an angel trying to fly. We bid her “Fly Chirelle Fly” rise above this life and fly swiftly to the next life. Thank you for all that you taught us and your example to us.