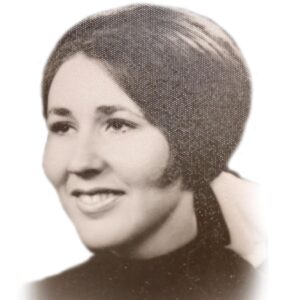 Carol Isham passed away peacefully during the early morning of Wednesday, October 20, 2021, with her son and daughter at her side.

She was a born, on December 19, 1951, in Kingman, Kansas, the daughter of Charles and Dorothy Bradley (Peak). She graduated from Garnett High School in 1970 and attended Wichita State University. She worked at various companies, including Cain’s Coffee Company, Pitney Bowes and for her father, before her twenty-year tenure at Blue Cross Blue Shield of Florida (Florida Blue).

Carol retired in 2015 from Florida Blue, after the passing of her late husband, Robert J. Isham, and moved to Logan, Utah to be closer to her son and his family. While retired in Utah, Carol enjoyed time in her back yard, watching her grandchildren play and watching Jacksonville Jaguars football, while eating chicken wings.

Carol was a creative force and enjoyed painting, writing, reading, word games, classic movies, music (especially her son’s jazz performances), and comedy of the goofy and divergent variety. Carol was also an avid and unrelenting fan of the Jacksonville Jaguars, even during most years of rare and intermittent victories. Carol loved her dogs like her own children and spoiled them like she did her grandchildren.

She was preceded in death by: her parents, Charles Edward Bradley and Dorothy May Bradley, her sister, Connie Walker Bradley, and her late husband, Robert J. Isham.

Private family services have been held, and there will be no public viewing or services.

Carol’s family suggests memorials in the form of donations to the Cache Humane Society, https:// cachehumanesociety.org.