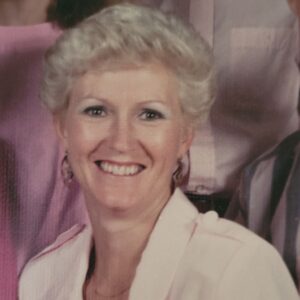 Erica McDaniel Baton Lish, 70, left this earthly state Wednesday October 13, 2021 peacefully surrounded by her family. Erica was born July 6,1951 in Broome, Western Australia to Terence and Nancy McDaniel. Erica was a member of The Church of Jesus Christ of Latter Day Saints. She grew up in Western Australia and later moved to the United States in June 1971 where she came to marry Roger S. Baton, Sr. July 31, 1971 in the Los Angeles Temple. They later divorced. Together they had 4 children that were her pride and joy.

She worked as a bank teller for many years and later became a certified phlebotomist. Through her years of working she met many life long friends. Her interests included competing in ballroom dancing, gardening, baking, cooking, sewing, and giving endless service to others through her many loaves of bread and pots of hot soup. Her greatest accomplishment was raising her 4 children. She later married the love of her life, Kenneth R. Lish September 9, 1999 in Perry, Utah, who joined her in death 3 days later. With this marriage, she extended her family to a total of 7 children.

She is survived by her 4 children and 2 of her 3 step children, Roger S. (Lisa) Baton, JR.; Shane D. ; (Leslie) Baton; Niari A. (Justin) McFarland; Danielle Brown; Amanda and Aimee Lish. She was “The Nan” to 9 grandchildren and 4 step grandchildren. She is also survived by her brother Peter (Kim Roe) Daniel; sisters Erron (Danny) Earl; Shane McDaniel; nieces and nephews whom she adored as her own children.

She is preceded in death by her parents and 1 stepson, Brandon B. Larsen and her first true love Elvis Presley.

The family would like to offer a special thank you to all the staff of Brigham City Community Hospital.

In lieu of flowers, plant a tree or flower or do an act of kindness to someone else in memory of Erica.

Click this link to view additional details about Erica’s Services, including any available live streams: https://my.gather.app/remember/erica-baton-lish