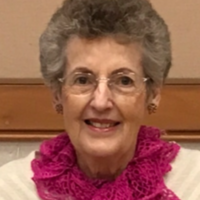 Diane Hartley Gleed, 81, surrounded by her family, was called home to a loving Heavenly Father on Tuesday evening, October 12, 2021. She was born May 26, 1940, in Malad City, Idaho, daughter of Ernest Hartley and Mabel Marietta Hancock.

Diane met and grew up with her beloved husband in Malad City singing and dancing with each other. Her love and talent of music and dance brought great joy to her and those she shared it with. She graduated from Malad High School and attended Brigham Young University for two years. Diane lived in Idaho, Utah and Washington, residing in Layton, Utah for the past 35 years. Diane taught piano for many years, worked as a cook in an elementary in Washington, ZCMI café and retired from the LDS Church Office Motor Pool. With her husband, they enjoyed travels to Jerusalem, London and Nauvoo.

Diane was an honorable and valiant Daughter, Sister, Wife, Mother, Grandmother, Great-Grandmother, Aunt, Friend, and Child of God who dedicated her life to her family and the Lord. Diane was a faithful servant of Heavenly Father and Jesus Christ and shared that love with everyone with whom she came in contact. She was thoughtful, caring, loving, kind, and provided service to many.

Diane was a life-long, active member of The Church of Jesus Christ of Latter-day Saints. She served faithfully in many church callings, including playing the piano/organ, directing choirs and many Relief Society positions. She served an LDS mission with her husband in Los Angeles, California. She also served as an ordinance worker in the Ogden Utah LDS Temple.

The family would like to thank the wonderful staff at Layton Sunridge Assisted Living where she enjoyed listening to stories from the employees. They would also like to express gratitude to the doctors and nursing staff at the University of Utah Neuro Critical Care Unit.

Graveside services will be held at the Malad City Cemetery.

A live stream broadcast will be posted at a later date.

We love you, Mom