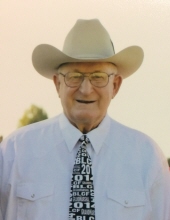 Charles Elliott Hulme, age 94, of Bloomington, Idaho, slipped peacefully through the veil on October 6, 2021, surrounded by his devoted wife of nearly 54 years and all six of his children. He will be greatly missed, but his family is comforted by the thought of his joyful reunion with so many beloved family members and friends who have gone on before him.

Charles was born August 12, 1927, in Bloomington, Idaho, to John Philip and Eurilla LaVerna Faylor Hulme. He learned the importance of responsibility and hard work early in life. His father died when Charles was only fourteen years old, and he took over the family farm soon after he graduated from high school. Through the years, he became well-known as an outstanding cattle rancher and horseman. He always owned several good teams of horses and beautiful, registered quarter horses. He was honored by the Governor of Idaho as a Century Rancher because he operated a ranch that had been in his family for over 100 years. In addition to ranching, he was active in many community organizations, oftentimes serving in leadership roles. In 2014, he was honored to be named the Grand Marshall of the Bear Lake County Fair and Rodeo. Charles spent his entire life in Bloomington in the home where he was born. With great reverence for his heritage and the Hulme Ranch, he lived on the property originally owned by his pioneer grandfather, William Hulme, one of the early settlers of the Bear Lake Valley.

Even though Charles was an excellent rancher, he has also been called “a man for all seasons.” He enjoyed playing basketball and football in high school and continued playing “outlaw basketball” for many years after high school. He was also an avid hunter. He loved music and sang in the Bloomington Quartet for over forty years. He had an incredibly bright mind that stayed sharp right up until the end of his life, and he loved learning anything he could. Reading and studying were a joy to him, and he always had a desire to learn more about the Gospel and church history. He was loved for his quick wit and his ability to find a perfect “one-liner” for every occasion.

In addition to his work and play, he was a devoted member of the Church of Jesus Christ of Latter-day Saints. He served in many callings throughout the years, often with the youth. He loved to teach them about the gospel of Jesus Christ. Among those callings were Stake Young Men’s President, two bishoprics, a member of the high council, and a member of the Bear Lake Stake Presidency for eight and a half years (now known as the Paris Idaho Stake). He served a mission to Northern California before he was married and served a second mission with his wife, Connie, to Adam-ondi-Ahman, Missouri. The two of them also served in the Logan Temple for nearly ten years.

More than anything, Charles Hulme’s greatest love was for his Savior and his family. He spent many years as a bachelor before finding his wife, Connie. After he offered her a ring on the top of Paris Peak, he said, “She made a good choice.” They were married and sealed in the Logan Temple on November 17, 1967. Speaking of Connie, he said, “Most of what I have accomplished is because of her.” He taught his children many lessons through the years; and, on occasion, they would hear him say, “I’m not raising cows; I’m raising kids.” They were taught to work hard, to “never say can’t; only say it’s hard,” and to honor their family name. They are all proud to be his children and to have been raised in the Bear Lake Valley.

He was preceded in death by his parents and brothers: Orval, Horace, Melvin, and Philip.

Those who would like to participate in the service remotely are invited to view the service on a live Zoom broadcast at https://zoom.us/j/94680788750?pwd=QzZVOEJOeExSZXk1QjJIMlA1Uk9vUT09.

Interment will be in the Bloomington Cemetery under the direction of Nalder Funeral Home.

Following the funeral services, guests are invited to Charles Hulme’s home, where a horse-drawn carriage will carry him to the cemetery. Loyal Hulme, his son, will follow on horseback, leading Charles’ horse with his empty saddle. He will be followed by the honorary pallbearers (his grandsons) on horseback. The family invites and encourages any riders and horsemen who have ridden with Charles over the years to follow as well, in a final tribute to him.

The Hulme family wishes to express their heartfelt gratitude and love to all of their family and friends who have shown such an outpouring of love and support for them. They sincerely appreciate it. They know your love and friendship meant a lot to Charles.