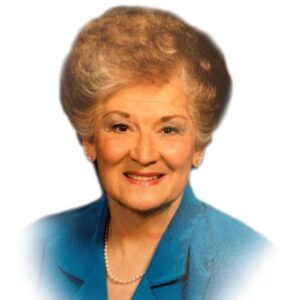 Carma Ellen Peterson, 91, passed away September 23, 2021 in St. George, Utah. She was born December 10, 1929, in Smithfield, Utah. She was the daughter of Wallace Lorin and Mona Gladys Olney. She was the second child of four children, Norma June Olney Thompson, Colleen Olney Lawlor, and Wallace Lorin Olney, Jr. She was raised in Smithfield, Utah and graduated from North Cache High School.

Carma married Edward Seth Peterson on November 12, 1957. They had three children, Cory L Peterson, Jeffrey Edward Peterson, and Robert Matthew Peterson. She was blessed with four grandchildren, Cody, Nathan, Kate and Justin. She lived in California where she and Ed owned and operated a Motel. After retirement they returned and made their home in River Heights, Utah, and later St. George, Utah.

She is survived by her children, grandchildren, and one daughter-in-law, Georgie Peterson, brother Wally (LaRae), and many nieces and nephews whom she loved as her own. She is preceded in death by her husband, two sisters, Norma and Collen, and daughter-in-law, Nancy Peterson. Carma had a very special bond with her only brother, Wally, whom she loved dearly. She will be remembered by her feisty and hilarious sense of humor, but most of all her heart of gold.

A viewing will be held Monday, October 4, 2021 from 11 to Noon at Nelson Funeral Home of Smithfield, 85 South Main Street in Smithfield.

Graveside services will follow beginning at 1pm in the Smithfield City Cemetery.