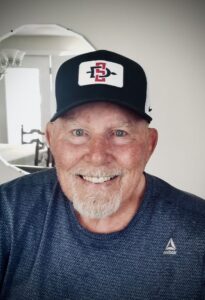 Donald Larry “Coach” Findley of Brigham City, Utah passed away at Ogden Regional Medical Center on August 25, 2021, at the age of 78 from a severe COVID infection, despite being fully vaccinated, with his wife and sons comforting him at his side.

Larry was born in Augusta, Arkansas on March 12, 1943. The youngest of 6 children, he was raised by his mother Ina. He left home for Costa Mesa, California at the age of 14, where he graduated high school in 1962. It was there that he developed a deep love of football. He attended Orange Coast College for two years, where he played football and helped lead his team to a Junior Rose Bowl victory. He then enrolled at San Diego State where he started at offensive guard on the football team. Drafted by U.S. Army, he was stationed in Korea for two years before returning to college. When he returned to San Diego State, he regained his starting position and helped lead the team to a football National Championship. He graduated from San Diego State with a degree in Business Administration and decided to become a teacher and football coach.

In San Diego, he met the love of his life. He married Barbara Bowman on August 22, 1970, and they recently celebrated 51 years of marriage. After teaching and coaching in California and Idaho, they settled in Brigham City in 1978. Larry taught and coached in the Brigham City community for over 30 years. As a teacher and coach, the most important things to him were not grades or win/loss records, but ensuring his students and players were successful in life. Late in his teaching career he transitioned into teaching at the adult and alternative education high school. He worked hard to ensure success in life for those who many had given up on, and his students respected him greatly for this.

Those who knew him will remember him for his kindness, generosity, occasional stubbornness, and tremendous compassion for others. His impact on those around him cannot be understated. He has provided guidance and support to countless players and students, altering the life path of many for the better. He had a strong faith in God and was an active participant in the Community Presbyterian Church.

In his retirement he enjoyed golfing, taking his dogs on walks, volunteering at the local animal shelter and meals-on-wheels, and most of all spending time with and talking about his grand kids. He was an extremely proud father and grandfather.

A virtual funeral with take place on Saturday, September 18, 2021, at Noon Eastern. Details are available at: https://www.gatheringus.com/memorial/larry-findley/7913. A celebration of life is being planned for the Spring/Summer of 2022, pending the status of the global COVID pandemic and will be updated on his memorial website. Services entrusted to Gillies Funeral Chapel.

People wishing to honor Larry may do so by donating to: