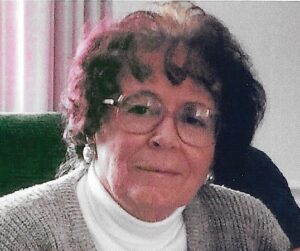 Diane Ellen Jorgensen Johnson, 85, Preston, passed away July 27, 2021, at her home of natural causes due to age. Diane was born in Logan, Utah, on April 16, 1936, to Reese Myron and Nettie Homer Jorgensen. She was the second of three children and grew up surrounded by friends and relatives in Benson, UT.

Some of Diane’s favorite memories were playing with her sister, cousins, and friends in the slough, spending all day Saturday marathoning movies at the show houses in Logan, mischievously hiding in the ditch with friends at night and screaming when cars passed by, and going roller skating. Diane was fortunate to have her grandparents and many aunts, uncles, and cousins nearby in Benson and the Cache Valley area. She loved visiting relatives and cherished the family gatherings up at Logan Canyon. Relationships were important to Diane, and she maintained some of her schoolmate relationships for life. Diane always had a love of children and she earned spending money by babysitting.

While a child in Benson, Diane attended a two-room schoolhouse that taught 6 grades. One of her memories of this time was how she had to teach a bully to quit teasing her younger sister, Lois. He was sitting on a heater and Diane grabbed both his ankles and jerked him off. He fell like a rock. She got in trouble, but it was worth it. Diane’s high school years were spent at North Cache high school, from which she graduated in 1954. During her high school years, Diane was introduced to a dashing, red-haired young man named Charlie Johnson. Once he set his eyes on her, Charlie was smitten and he quickly worked to eliminate his competition, even to the point of tailing her and her date clear to the drive-in, where he parked alongside. Charlie drove one of the fastest cars of the time so he always made an impressive entrance when he drove up to the high school to pick her up. In fact, his antics eventually resulted in the principal personally banning him from the school pick-up area. Diane was very flattered and impressed with this determined, flashy suitor and she accepted his proposal of marriage. They were married in the Logan Church of Jesus Christ of Latter-Day Saints Temple. One of the main memories of this event is that after the reception, the family loaded the wedding gifts into the back of a pickup for transport to the newlywed’s home and a pair of the ranch dogs jumped into the back and had a big fight, tussling all over the nicely wrapped and labeled gifts. The resulting tangled mess was a challenge to sort out later.

Diane joined Charlie in a small, two-room house on his family ranch, Stock Valley Ranch, in Treasureton, Idaho. Their first house had no bathroom plumbing so an outhouse was used through all four seasons until their new home was built and finished in 1960. How wonderful and luxurious it was to have a furnace and a nice bathroom with a tub! These early years were especially lonely and challenging for Diane, who had come from a childhood filled with many relationships and activities with friends and family to the relative isolation of Stock Valley Ranch. This home-sickness was relieved when she bore her first child, Wesley. Wesley was followed by Denise, Laura, Rodney, and Clyde. Diane later stated that the benefits to her children from the wonderful childhoods they had at the ranch were well worth the sacrifices it had taken to live there.

The winters were long, the snow deep, and the gravel road out of Stock Valley slick and unpredictable. Diane did not like the added hardships that winter brought and she was not hesitant to declare that she “hated” the snow. Summers at the ranch were beautiful with all the richness of wildlife, scenery, and fresh air that the mountain location had to offer. Diane loved growing a variety of flowers and once she discovered which varieties were hardy at that high elevation, she added to her collection every year. One of her favorite things to do was stroll through her garden and savor the growing and blooming of her flowers from the first green shoots breaking through the ground in the spring, to the budding and blossoms, to the final going to seed and dormancy in the fall. The flower garden stroll was a frequently shared enjoyment with Diane and her visiting friends and family. Among her favorites were mixed varieties of day lilies, mini-roses, and fall bulbs. Along with a flower garden, Diane kept a busy and thriving hummingbird feeder that fed many generations of the small birds for many summers.

Diane was a homemaker in every sense of the word. She was a competent money and resource manager and was able to stretch her available resources to cover all the family needs. Among the many foods, she bottled (canned) was peaches, raspberries, corn, chile sauce, and beans. Her homemade chokecherry syrup was always a favorite. Extra fresh vegetables were harvested from a large vegetable garden. An excellent cook, some of Diane’s specialties included whipped fudge, caramel corn, homemade ice cream, and flavored ice cream malts. She loved to collect and experiment with new recipes. Diane had a gift for bringing out the flavor of simple foods such as corn on the cob, pan-fried squash, venison, and elk steak, mashed potatoes, and hash browns. Her oyster, tomato, vegetable, and chicken soups were always delicious, as were her grilled cheese sandwiches. The tantalizing aromas that drifted out of the small kitchen were a continual attraction to anyone in the home and Diane often had to tell these loiterers to “get out of the cubby hole!” In the earlier 20 years at the ranch, Diane was part of the then Treasureton ward. At that time she held a variety of callings, including Relief Society and Primary president, and was busy and involved with all the ward activities such as bazaars and ward parties. Later, the Treasureton ward was joined to the Riverdale ward and she and Charlie attended meetings there. Diane was given a calling as a Primary teacher, a calling which she dearly loved and was devoted to. Diane put her full heart into this area of service and taught children from ages 6 to 8 (CTR B) for over 40 years. Her great love for the Lord and each child in her classes were clearly evidenced by her gathering of boxes of extra materials to supplement the lessons, her faithfulness and dependability of consistent attendance, and her continued love for her students as they grew into adulthood and passed the important milestones of their lives. Serving alongside the many other members of her various wards brought dear and lifelong friendships, which Diane treasured. Along with being a dedicated, devoted, and involved mother, Diane’s all-encompassing love extended to her grandchildren and great-grandchildren. Each one felt that love and returned it in full measure. There was often playful bickering about whose grandma she was. “She’s MY grandma!” “No! She’s MY grandma!” “I saw her first!” There are many pictures with Diane and a child or grandchild flaunting some type of ownership for the others. The issue of who was “the favorite” was often jokingly disputed.

As her daughters welcomed new babies into their homes, Diane would come and stay for up to a week to help with all the challenges. She sewed and brought soft flannel receiving blankets, edged with colorful decorative stitching. It was always a relief to harried new mothers to see that rescue had come and Diane tenderly shared many of the mothering skills she had learned. Diane was a dedicated letter writer and many a heart was cheered to see one of her colorful envelopes shining out in an otherwise bare or bill-filled mailbox.

Diane loved to take family road trips which were often to Yellowstone, Las Vegas, and California. Often trips were planned around making a visit to relatives who lived out of state. Diane could always be counted on to have a variety of drinks, tasty snacks, and sandwich makings for the travelers. As the physical challenges that come with aging became more debilitating, Charlie and Diane faced the increasing hardship of being unable to keep up with the physical challenges of living at the ranch. She and Charlie moved to a home in Preston, Idaho in January of 2018 and Charlie passed away shortly thereafter. Having been provided a secure and safe home within reach of the resources she needed, Diane was closer to help from friends and relatives and this home became the new gathering spot for those who loved her. Many fun family gatherings and welcome visits from dear friends brightened her days in this home. Her devoted and kind daughter, Laura, moved in with her during her most challenging final years. Laura’s tender and thoughtful care was a wonderful blessing to Diane and all others in the family, as this loving service allowed Diane to continue enjoying her relationships and her home right up until she passed.

Diane is survived by her children, Denise Sarsorito (Rob), Laura Johnson, Rodney Johnson (Heidi), and Clyde Johnson (Sandy). She is also survived by 18 grandchildren and 22 great-grandchildren.

Funeral Services will be lived streamed for those who cannot attend in person.