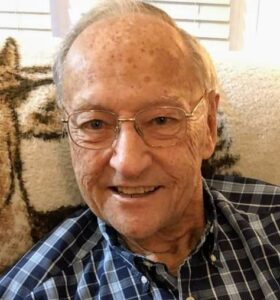 Arvin Jack Pounder, 83, passed away on Wednesday, July 28, 2021, at the Ogden Regional Hospital due to a stroke and renal failure.

He was born January 11, 1938, in Nyssa, Oregon, the son of Arvin Elijah Pounder and Catherine “Cassie” Gray Pounder.

At the age of three, his family moved to Richfield, Idaho, where his father worked on the Union Pacific Railroad. Jack grew up loving to camp, hunt, and fish. After high school graduation, he attended Grimms Business College in Mechanical Drafting/Design. He moved to Brigham City to work at Thiokol.

In the Summer of 1960, a member of his car pool introduced him to the Church of Jesus Christ of Latter-Day Saints and he was baptized September 4, 1960.

In December of 1960, he met his future wife, Margaret Hacking. They were married in the Logan Temple August 7, 1961. Throughout the next several years, they lived in Aberdeen, Washington; Idaho Falls, Idaho; Hunter, Utah; Boise, Idaho; and then back to Brigham and ATK (Thiokol).

He was preceded in death by a son, Brian Robert, his parents, and two sisters.

Condolences may be sent to the family at www.myers-mortuary.com.