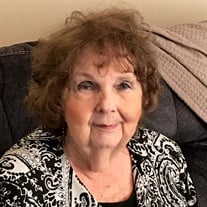 Marilyn (Brat) has one older brother Martin Clair (Dit). The family motto quickly became: We four, no more.
Mom loved her childhood home on 300 South. Her summers were spent playing under the large willow tree in the backyard with her many kittens while picking bouquets of dandelions. She has never liked when we spray the dandelions, because they were her favorite “flower” as a child.

Marilyn’s teen years welcomed many friends, especially one long-lasting friendship with Printha Johnson Sorenson. As adults these two made Fredrico’s Pizza the place to catch up and reminisce, vowing to blend up their pizza and drink through straws when they got older. As a family we have always said, and will continue to say, “We all need a Printha.”

Marilyn met a handsome young man named Ted Boman at North Cache High School in Richmond, Utah. They were married for time and all eternity in the Logan, Utah, Temple on December 5, 1958. Their crazy, busy life took off from there. After two boys, two girls, a boy, and another girl, Ted felt their family was complete. It only took mom eight years to convince him he was “wrong.” One spoiled girl and three boys later, the family was “all here.” Mom’s greatest accomplishment is her family. It has blossomed into her “favorite flower.”

On April 23, 2011, a stroke changed mom’s life. After physical and health-related challenges, she began her ten-year battle. After each setback she would say, “I’m not ready to leave you all yet,” or “I want to be with the new grandbaby on this side.” Mom fought till her last breath! When her family stepped away, she crossed the veil to be reunited with her Savior, her mom and dad, LaDawn, and Gentry. Mom had an unwavering testimony of her Savior Jesus Christ and was a faithful member of the Church of Jesus Christ of Latter-day Saints. Her legacy of faith and the power of prayer has been passed on to each of her posterity and for generations to come!

She is preceded in death by her parents Henry and Eva Haslam, in-laws Golden and Phoebe Boman, daughter-in-law LaDawn Boman, and grandson Gentry Boman.

Funeral services will be held on Saturday, July 31 at 12:00 p.m. at the Smithfield LDS Stake Center located on 451 South 250 East Smithfield, Utah.

Interment will be in the Smithfield City Cemetery.

As siblings, we lovingly wrap our arms around our sister, Gina. With grace, care, and love, she gave us ten more years with mom. We love you, Gina!