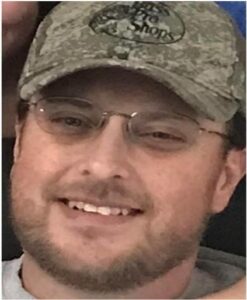 Douglas Jason Montgomery, age 48, died on July 24, 2021 in Nibley, Utah after a  courageous battle with cancer.

Born on October 30, 1972 in Norfolk, Nebraska to Jimmy W. Montgomery and Judy C.  Obbards. He attended Batesville High School and graduated with the class of 1991. Doug has three boys that were his pride and joy. He enjoyed spending time with them  and loved taking them out shooting. His constant companion and loyal service dog was  Dozzer (his fur baby).

He also enjoyed hunting, camping, snowboarding and scuba diving. Doug liked fishing. He would catch and release. His favorite bait was the spinner. He was a very good  fisherman caught on most fishing trips.

Doug had different jobs. He talked about working on the Mississippi working on a  tugboat moving the barges. He liked talking about this job and showing pictures. He spent the last two years with his sweetheart Serenity. They spent time camping, fishing and shooting. They would spend time in the mountains watching the sunset and  looking at the stars.

He really liked going to Walmart on his day off and talking to his co-workers. Doug liked to talk and enjoyed sharing stories about hunting and guns. He was a source of information about his guns and how to use them. It was fun listening to his stories.

Doug will be missed by his boys and his family. Including all of his friends. Especially by Serenity and her family. We love you Doug.