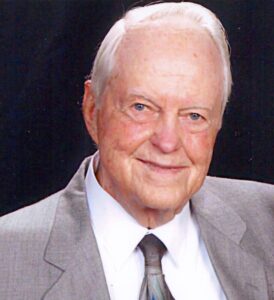 Jerry was born in St. Joseph, MO, September 17, 1931. His parents were Richard Farrel and Ruth Haun Keller. He was an altar boy and liked to climb out the church window onto the roof and steeples. At age 12, Jerry moved with his family to San Diego, CA. He soon loved the ocean and body surfing.

Jerry went to Catholic Schools and graduated from St. Augustine High School where he played football and went to Arizona State on a football scholarship. When the Korean War broke out, he joined the Air Force and he was sent to Williams Field, AZ. Jerry spent his working years in Aeronautics. He has worked for TeleDyne Ryan in San Diego and for Morton Thiokol at Promontory Point, UT, where he was a project manager over the Space Shuttle Solid Rocket Motor Program. He made many trips to Florida and to NASA in Tennessee. His proudest work accomplishment was working on the Space Shuttle program.

Jerry was always active, loving the outdoors. He was an avid fisherman, and enthusiastic hunter of deer and waterfowl. He enjoyed skiing, gold panning, and working with gems and minerals. Jerry volunteered at the Brigham City Migratory Bird Refuge.

Condolences may be sent to the family at www.myers-mortuary.com