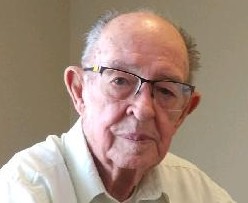 Robert (Bob) Landeen was born May 30, 1926, in East Mill Creek, Salt Lake County, Utah to Gottfred Emanuel Landeen from Alvaden, Sweden, and Lisle Hixson Landeen of Wanship, Utah. One of 6 children, he is preceded in death by his parents and siblings Fred Hixson Landeen, Glen Richard Landeen, Mary Karen Landeen, and Donald Van Landeen. His brother James Monroe Landeen is the last remaining member of the family.

Bob’s family moved to Rock Springs, Wyoming in 1929. He graduated from Rock Springs High School and Utah State University. Enlisting in the Army in 1943, he served a year before being honorably discharged. In 1951 he married Martha Jane Harding in Anaconda, Montana where he was stationed with the Forest Service. Four children were born in Montana – Daniel Stephen Landeen, Ted Robert Landeen, Ellen Gail Landeen, and Carl Raymond Landeen.

The family moved back to Rock Springs, Wy in 1960 where he was a carpenter for many years, as was his father before him, and then with the FMC corporation as a lab worker. In 1996, when his wife retired, they moved to Mead, WA in the area north of Spokane where they were until moving on to Clarkston, WA in 2011. Jane passed away in 2017 and Bob moved to a retirement home in Preston, ID close to where his son Carl lives, and where Bob passed away.

Bob was a gifted carpenter and did many custom projects for family and friends. He enjoyed fishing, did some bowling, camping, shooting, and had a book open every night. The family has a picture of him with his Harley Davidson bike during his college days as he explored the Logan, Utah area. He generously volunteered his time and expertise to many people who needed help with a wide variety of jobs. He was a member of the LDS church and held many different positions throughout his life. He helped construct two LDS churches – one in Anaconda and the other in Rock Springs. A quiet man, he let his actions speak to the quality of his character and the kindness of his heart.

No local services will be conducted. Arrangements are under the direction of Franklin County Funeral Home, Preston, Idaho. Please share a favorite memory of Bob or offer condolences to the family by leaving a tribute on this page.