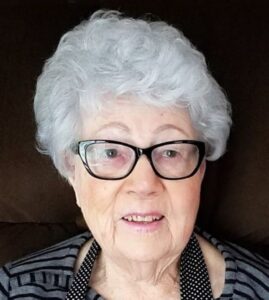 Joycelyn Westover Tarbet passed away July 21, 2021 in Logan Utah, at the age of 87. She was the oldest and only daughter born to Walter Reed (Smoot) and Myrtha Kent Westover on August 29, 1933 in Logan Utah. She grew up in Lewiston on a farm and was surrounded by generations of family. After graduating from North Cache High School, she continued her education at Utah State, spending her summers working in Salt Lake. During those years she met and married Delbert C. Tarbet in the Logan LDS Temple on December 17, 1954. Joycelyn’s father was determined she would obtain a college degree which she did in 1955. She turned down a teaching contract at Smithfield Jr High to be a full-time mother and partner with Del on their farm.

Joycelyn and Del began their life together in Smithfield. She loved her time in Smithfield and made many lifelong friends. In 1963 Joycelyn and Del bought a farm in Lewiston which became a project and love for both of them the remainder of their lives. She excelled at Motherhood and has the complete respect of her four children. She was always engaged in service in The Church of Jesus Christ of Latter-day Saints, serving in presidencies of the Relief Society and Primary on the ward and stake level. She was also an active member and leader in the Daughters of the Utah Pioneers.

Joycelyn was a model wife and she and Del enjoyed a 65-year love affair in which she doted on him and took great care of him as his health declined. They were wonderful partners in their family farm. Del died in April 2020 and she has missed him greatly during the last 15 months.

Joycelyn is survived by her four children and their spouses: Kent and Holly; Brooks and Sally; Suzette and Glade (Smith); Greg and Nancy. Ten grandchildren: Kara (Phil), Kade (Jessica), Tiffany (Patrick), Kelsey (Brady), Raquel (Adam), Lauren, Lindsay (Ryan), Jordan (Kayd), Logan (Megan), and Eliza. 16 great-grandchildren (with one on the way). Two Brothers: Lewis (Diana) Westover and Ernest (Fran) Westover and sister-in-law Barbara Westover. She is also survived by many nieces and nephews who love her, as well as many in the extended Tarbet family whom she loved. Joycelyn was blessed with many good friends who will miss her.

She was preceded in death by her husband Del; Parents, Smoot and Myrtha; Brother, Craig and two great-grandchildren Kiera Driscoll and Baine Bobka.

The family would like to express deep appreciation to Dr. Russell N. Hirst who took such good care of her and Del for many, many years. We are also grateful for the staff at Maple Springs of North Logan for their love and care during Joycelyn’s final days.

Internment in the Lewiston City Cemetery.