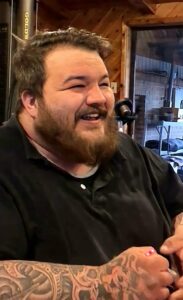 Chase John Jensen passed away in his home July 18, 2021. He was born May 25, 1990 to John and Lana Jensen in Montpelier Idaho. He was the second of three children. He attended school in Bear Lake, and graduated high school in 2008. Chase was a very talented wrestler a football player and did very well, placing at state in wrestling. He had a great love of football and wrestling and made many friends that lasted a lifetime. Chase attended college in Pocatello, Idaho. He later moved back home to Paris, ID where he built his home next to his family. Chase managed the Montpelier Subway. He took a lot of pride in his job and everyone knew him. He was friends with all who came in contact with him. He enjoyed his job very much and all the people that would come in and chat with him. He had a way of creating friends everywhere he went.

One of Chase’s biggest prides was being an Uncle. He has three nieces and two nephews and they were his world. He loved them very much and always had a way of making them laugh, and loved to tease. Chase loved spending time with his family. Anyone that knew Chase or “Speedy” as many knew him by, knew that he had the biggest heart. He had so many close friends and he enjoyed spending time with them and going on adventures. Chase loved cooking and was very talented at it. He would always love to share his creations with his family and friends.

Chase was preceded in death by his Grandfather Wilford Owen Roberts, his nephew Kol Owen Woolstenhulme, and his Aunt Michelle Roberts Saxton.

A funeral service will be held on Tuesday, July 27, 2021 in the Paris Stake Center.

Interment will be in the Paris Cemetery.