HYRUM — An exhibit that was to be presented last year was derailed by the pandemic and now will be presented at a time that seems more fitting as the area experiences what Utah Governor Spencer Cox calls the worst drought in 75 years. 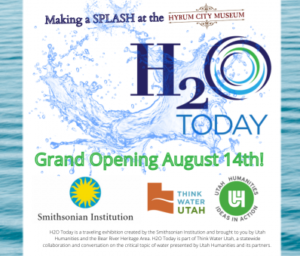 On KVNU’s For the People program on Tuesday, museum director Jami Van Huss said this involves many other partners in Northern Utah and Southeast Idaho.

“Also, just to really clarify, it is the Bear River Heritage Area that’s sponsoring and we have over four dozen partners throughout the Northern Utah counties of Cache, Box Elder and Rich. And then also it stretches up into southeastern Idaho into Oneida, Caribou, Bear Lake and Franklin counties. So, we have stuff going on regionally for six months, it’s really exciting,” she said.

Van Huss said there are regional exhibits you can check out this weekend.

“For instance, in Newton there’s an exhibit opening this weekend for Pioneer Day…that you should all go see and learn the really unique story of the Newton reservoir. And then it will go all the way through January into early February.”

She said the nice thing about being an expanded show is they get to go through different seasons which is huge for Utah and Cache Valley – from winter snows to irrigation summers.

For more information on the H2O Exhibit visit BearRiverHeritage.com/H2O.