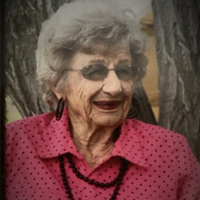 On the 26th of May, 1924, a beautiful baby girl was born in Pocatello Idaho to Mervin and Velda Neilsen. They named her Bette Anne. She joined her sister Venice and her brother Claire followed later by Leonard, Ellis and Alvin. Her youth was spent in Hawkins Basin where she walked approximately three miles to school every day. On occasion, someone would stop by and give them a ride but not very often. They were rich but they didn’t have a lot of money but always knew they were loved.

Everyone contributed to the family any way they could but Bette spent a lot of her summers working for different families doing household chores or anything that was asked of her. One year they couldn’t afford pencils and books for her Senior year so she delayed her schooling until the next year. She later graduated as Valedictorian of her class, something she rarely told anyone. She got an award for her beautiful penmanship and until she passed she still had beautiful handwriting.

She met the love of her life at the Crystal Dance. She was working for a family and it was on the 4th of July. She was supposed to have a date with Dave and she had bought a new dress for the occasion. Dave had a car and all of his buddies somehow convinced him to take them to Lava instead of going on his date. I’m sure he never lived that down. Somehow he convinced her to give him a second chance and there was no looking back. They fell in love and were married on April 11, 1944 in Pocatello, Idaho, even though their clothes and wedding ring had been stolen out of their car. Their marriage was later solemnized in the Idaho Falls temple on October 31, 1964. Their honeymoon lasted their whole entire life. She adored him and missed him so much when he passed. She has spent 30 years alone and so I’m sure her reunion with Dave was a marvelous and joyous one.

They made their home in Arbon Valley on the family homestead. Trees were always a big deal to Bette as when they built their house, there were no trees and she carried water to individually water every tree they planted. In later years this became a bit of a point of contention to whomever was tasked to mow her huge lawn. She loved her trees and her view from her living room.

To this marriage, three children were born. Stephen, Susan and Dave. She was a wonderful Mother, Wife, Friend and served everyone in need. Bette was an extremely hard worker and did whatever needed to be done putting herself last always. She was always so concerned about everyone else.

There was always a hired man so she had to cook for the family plus any hired help while still raising three children. She was an excellent cook, especially known for her pancakes. It was a Saturday ritual for anyone that could come to go there for pancakes, bacon and eggs. Her pancakes were well known around the valley. She would set a table full of plates but if someone dropped in, she would just get another plate out and anyone was welcome to join in the conversations and food. Family was everything to her. The Saturday mornings were some of her favorite memories. However, she was also known for her macaroni and onion salad. Her downstairs room full of tables was often the setting for holiday breakfasts and dinners. Her favorite saying was “what won’t fatten will fill”…

She always had chickens that she took care of until she got to the point a few years ago that she couldn’t do it anymore. She had the best fed chickens and cats in the State. She was always giving away eggs to anyone that needed them.

No one messed with Gma Bette’s Thursdays. That was her day to go to town and do whatever she wanted but she had a set routine. She had a standing hair appointment, stop at Deseret Industries and go down every aisle, get lunch at Taco Bell (with extra hot sauce), go to the hearing aid store, go to Fred

Meyers and then go to Ridleys for her groceries. After that, she would head to the bowling alley to bowl on a league for years. She had tropheys for her abilities and could outbowl just about anyone in the family. She packed her bowling ball with her every week. It was a sad day for her when she had to quit bowling because of her health but it wasn’t until she was 86. She would then head home with David and Steve watching for her car to go by so they knew she was home. She was very independent.

She loved family gatherings. She loved reunions, David’s chicken cookouts or any other gathering when the family could get together. She always said “I have the best family in the world”… and she meant it. She was a member of the Church of Jesus Christ of Latter Day Saints and held many callings. She was Relief Society President, Primary President, Sunday School teacher, Nursery teacher, Librarian and the Sunday School greeter. People everywhere waiting patiently to hear her joke of the week. When the Pocatello Temple groundbreaking took place, she was asked to be one who had a shovel. This was a highlight for her and quite an honor. Only one person from each Stake could participate in this and she was chosen. She felt very honored to be given this opportunity. We were hoping she could be able to be at the open house and dedication to complete the circle.

Her choice of drink was TAB. Everyone knew that she loved Tab and so when the Coke company said they were not making it anymore, it was quite a dilemma. We had people all over the State buying up all the Tab they could find. Many people joined in the cause but just a few months ago, she ran out of her last can of Tab and had to convert to Diet Coke. Many times she would ask grandkids if they would like a “snifter” of her Tab.

The Idaho State Fair was one of her favorite times of the year. She would call her lifelong friend and cousin BernaDeane Lusk and they would make plans to meet in Pocatello and would go to the fair every day. They would often meet up with Dorothy Meyers to share stories, “eat one of everything” and attend the horse races. Every year she would say that they were not going to go that year but every year they would end up going as often as their health would allow them.

Many times when we came in the house she would have her little paper cutter and newspaper on her lap. She cut out any articles that she thought someone might want to have. The scary part is we’re not real sure where she put all of them and we’re a little scared when we find them. She would work on her crossword puzzles and then clip out any articles she felt someone might want to see. When we told her that people could access them online, she said “Well I’m not computer literate and don’t want to be”. She had a tremendous memory. Often when family members couldn’t remember a name or place, they would call her and she would know.

She lived a long, healthy, happy wonderful life. She found joy every day and never complained about anything. She found gratitude and having lived through hard times, was very frugal and saved EVERYTHING just in case she needed it again.

Most of all, Bette loved her Savior Jesus Christ and the Church. She often bore her testimony and always said how appreciative she was of the sacrifice Jesus made for her. Her home was filled with pictures of Christ and the leaders of the church. She enjoyed reading books about church history and the lives of the Prophets. She loved it when she could go to the temple and was very sad when her health made it so she couldn’t attend anymore but always had a current recommend and paid her tithing faithfully. She was a true example of the love of Christ with her non-judgmental demeanor.

ANYONE was welcome in her home. She always said everyone has a past. They just need to look to Christ and push forward.

Bette is survived by her children Stephen Lusk (CaroLynne) of Arbon, Susan (Mike) Whiteley of Shelley, Idaho and David (Helen) Lusk of Arbon. She is also survived by many grandchildren, great grandchildren and great, great grandchildren, numerous nieces and nephews and more friends than anyone could count. All dearly loved and cherished their time together with her because she always made EVERYONE feel like they were so important to her.

She was preceded in death by her loving husband David Wayne Lusk, her brothers and sister, a daughter in law (Debi Cornforth Lusk) and grandson (Brett Wayne Lusk).

The funeral will be live streamed by Horsley Funeral Home by clicking on the service tab.

Interment will be at the Arbon Valley Cemetery. A luncheon will be served in Arbon after the burial for family and friends.

In lieu of flowers, please send a donation in Bette’s name to one of her favorite charities which were Primary Childrens Hospital or the American Cancer Society. She will be greatly missed by anyone who knew her. We love you “Grandma