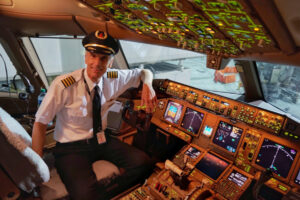 On June 26th, 2021, Don Gerszewski, 69, took off for what would be his last solo flight here on this earth. Don spent his entire career as an airline pilot training for unexpected events. He was calm, calculated, and meticulous in everything he did in life, but especially flying. In what can only be explained as divinely orchestrated conditions, Don was called back to his heavenly home through the wind, in the sky where he spent so much of his life. The way Don lived his life was proof that he never viewed death as the end, but rather as a gateway to progression. How fitting that his Heavenly Father would call him home in one of the places where he felt closest to Him. Don passed away quickly at the scene of the accident in North Logan, UT, in the presence of his son Scott and surrounded by close friends who witnessed the event.

Donald Gregory Gerszewski was born in Honolulu, Hawaii on June 17, 1952 to Richard J. Gerszewski and Ida Lorraine Torkelson. As the son of a naval aviator, Don lived in Hawaii for the first two years of his life, then moved to Virginia for a short time before settling in Bloomington, Minnesota for the remainder of his childhood. Don was fascinated by flight from a young age and spent much of his early years immersed in aviation as his father’s career transitioned from being a Captain in the U.S. Navy to the primary operations inspector (POI) for the FAA over worldwide operations of Northwest Airlines. In an interesting circle of events, near the end of Don’s airline career he recounted flying many of the routes from the US to Asia that his father negotiated and managed decades earlier while working for the FAA.

Don graduated from Lincoln High School in 1970 and shortly after began working as a ramp agent at the Minneapolis airport. He would often park at the end of the runway to watch the arriving and departing aircraft and would later share that those experiences solidified his aspirations for becoming an airline pilot.

In 1971, Don moved to Utah to ski “the greatest snow on earth.” He attended his BYU classes at night so he could ski during the day. During that time, Don’s lifelong conviction to faith led him to read a Book of Mormon that a friend gave him. He was baptized a member of the Church of Jesus Christ of Latter-Day Saints in 1972 alongside his brother Jim and best friend Larry Kacher. Shortly after, he served a French-speaking mission in Papeete, Tahiti from 1973-1975.

After his mission, Don transferred to USU to study aeronautical engineering and met Marnae Silcox. They were married on July 18, 1979 in the Manti, Utah temple. Don and Marnae moved to Wichita, Kansas after their wedding where Don worked for Beechcraft as an engineer on the King Air family of aircraft. During their seven years in Wichita, they welcomed their first two children, Marissa and Aaron. In 1986 Don was hired as a pilot by Delta Air Lines in Atlanta, Georgia. Their daughter, Erika, was born there in 1989 and shortly after, the family moved to Cache Valley where they had their son Scott in 1993.

Don flew for Delta Air Lines for 31 years, retiring at age 65 in 2017 as Captain on the Boeing 777. Throughout his career, he flew to nearly every destination serviced by Delta, but especially enjoyed his trips to Sydney and Tel Aviv. After his retirement, Don flew alongside his son, Scott, as a corporate pilot for the Wasatch Group. Together they had numerous once-in-a-lifetime experiences and enjoyed strong friendships and associations with everyone in the Wasatch family. Aside from work, aviation was one of Don’s greatest passions and a hobby he shared with his two sons, Aaron and Scott. In addition to inspiring his sons to become pilots themselves, he also influenced countless others to pursue a similar career path.

Don’s personality was the essence of optimism and was present even during the most challenging of times. His optimism worked in concert with an insatiable curiosity for life and zeal for adventure and became thematic for Don’s exploration of the world and its many cultures. Whether it was abroad or in his own neighborhood, Don’s greatest joy seemed to come from learning about and understanding another person’s own life experience. His level of intrigue was irrespective of a person’s station in life as Don was equally captivated by the most humble and the most famous and successful individuals. Don had a gift of genuinely listening to others and making them feel cared for and important.

In fatherhood Don was in his element. He instilled his love for worldwide travel and adventure in his family from a young age and recognized its importance in shaping one’s character. Don loved sharing his favorite hobbies with his kids in the great outdoors, whether it was biking, skiing, boating, hiking, or running. Even in his retired years, his kids had a hard time keeping up with him! He was known for being ever-present and available to his children, grandchildren and sons- and daughters-in-law. He was deeply involved in nearly every facet of his kids’ lives and was a steady example of a caring father. He is remembered for unabashed and practical advice that has guided his family through all stages of life. He took his role as a provider seriously and fulfilled it with foresight and wisdom beyond his years.

Aside from his unassuming example, Don was a mentor to many around him, but especially in his church service. He dedicated many years to serving in bishopric and high council callings in the Logan East Stake. Some of his fondest and most valued interactions and relationships came from his time serving as a bishop in the USU 51st single student ward. In his journal written at age 20, Don committed to dedicating his life to his Savior, serving Him in all of his words and actions. He remained true to this commitment and was a faithful disciple of Jesus Christ throughout his life.

Don is survived by his wife Marnae Silcox and their four children Marissa (Daniel Odell), Aaron (Alexis Walk), Erika (Nicholas Potter), and Scott as well as his brother, Jim (Sunni) and his six grandchildren that were his pride and joy.

He is preceded in death by his sister and her husband, Suzanne and Kent Burke, parents Richard and Lorraine, and nephew Jonny Burke.

A celebration of life reception for Don will be held on Wednesday, July 7th, from 6pm-8pm at the Lundstrom Park 3rd Ward building located at 1260 N 1600 E in Logan, Utah. The funeral will begin Thursday, July 8th at 12pm at the same location, with a short viewing prior from 10:30am -11:30am.

Funeral services will be streamed live on lindquistmortuary.com by scrolling to the bottom of Don’s obituary. A recorded version will also be available shortly afterwards via the same link.