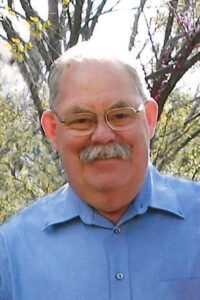 Cal was born September 15, 1955 to Calvin O’Neil Anderson and Rosetta Murphy. He was the second oldest in the family of five children.

Cal had a love of trains. He also enjoyed camping, fishing, 4-wheeling, long car rides, history, and making people laugh. He loved his grandchildren with all his heart. They were his whole world and his pride and joy. He never passed up an opportunity to talk about them or show their pictures.

Cal attended Ogden High School and graduated in 1973. While in high school, he met a beautiful girl named Emma McCracken. They fell in love quickly. They met February 16th and Cal’s mother passed away February 24th. Emma was a great source of strength and comfort to him. They continued their courtship through the rest of high school. They were married on April 18th, 1975 in the Logan Temple of The Church of Jesus Christ of Latter-day Saints.

Their marriage of 47 years included many, many, adventures. However, their greatest accomplishment and Cal’s pride and joy were his four children. His daughters were his pride and joy. While his twin sons, who passed away as infants, were always in his heart.

Cal’s love of working with his hands, led to a lifetime of doing just that. He started at Precision Built Homes, where he made cabinets. He was great at wood working and could build anything. Next came Don’s Plumbing, followed by Burton Walker Lumber, where he was a salesman. He later started working for Ogden City Schools. He worked at T.O. Smith Elementary and Ben Lomond High School, where he retired in 2016 as the building engineer. Cal could and would fix anything.

Cal’s love for the Gospel of Jesus Christ was shown by a lifetime of service. He was a faithful member of The Church of Jesus Christ of Latter-day Saints in the Rushton Heights Ward. He served as a counselor in the bishopric, a seventy, a high counselor, a stake clerk, primary worker, temple worker, scout leader, and was serving as the membership clerk at the time of his passing. He was a member of the Sons of the Utah Pioneers, Ogden Chapter.

Cal was preceded in death by his parents, his twin sons, Calvin Brent and Charles LaMar, a grand baby and many aunts and uncles.

Special thanks to staff at McKay Dee ICU for their loving care. A very special thank you to the physicians Dr. Michael Webb, Dr. David Goff, and Dr. Elliot Karren for their exceptional care of our dad.

The service will be live streamed on Cal’s obituary page on Myers Website www.myers-mortuary.com and will remain there indefinitely.