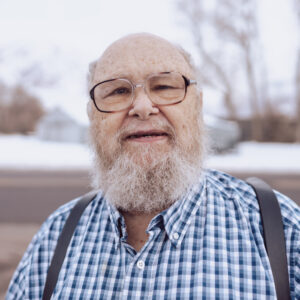 James Christopher Larson was born on February 16, 1949, in Kingman, AZ. He moved to Brigham City when he was two weeks old; a place he loved and never strayed too far away from his whole life. He passed away on June 9, 2021, after a long-fought battle with cancer that metastasized to his bones.

After graduating from Box Elder High School in 1967, Chris worked hard for two years to save for a mission. He remembers spending one long summer in charge of removing road kill on the highways. He served in the Australia, Melbourne mission, spending much of his time on the island of Tasmania. He loved his time there and spoke often of his experiences. We were blessed to meet and keep in contact with some of the people he knew while serving there.

After his mission, Chris attended Utah State University where he received his Bachelor and Master degrees. He met Deborah Ann Brey in the fall of 1974 on a blind date. After describing himself to Debby’s roommate as “short, chubby and bald,” she tried desperately to find a ride home to Bountiful to avoid her date with him. But alas, she could not escape and the two were married in the Logan Temple on July 30, 1975. Together they were blessed with three beautiful daughters and one handsome, spoiled son.

Chris developed a love for baseball early on, a love that would stay with him for life. The LA Dodgers quickly became his team when he was a young boy. After breaking his heart time and time again, he always ended October saying, “There’s always next year!” Even though the Dodgers had his heart, he always said his next favorite team was “whoever is playing the Yankees.” He often lovingly said, “I hates the Yankees.” (That, coming from an English teacher!) 2020 was a difficult year in many ways, but was made a bit sweeter when his Dodgers won the World Series.

Chris taught at Bonneville High School for three years before landing his dream job teaching English and Journalism at Box Elder High School where he taught for over 30 years. Chris was the head baseball coach at Box Elder for many years. A sport he loved so much. But we think it’s safe to say he loved his softball girls and his Purple Reign family the most. His summers were spent at the ball fields. There’s no place he’d rather be.

Chris loved to write. He had a great passion for news and journalism. He was the sports writer for the Box Elder News Journal for over 30 years. He loved being on all the courts or fields taking pictures with Debby in the stands taking notes so he could later write his stories for the paper. They were a great team!

At one point in his life, Chris dreamed of being an actor. His major role was played at the Heritage Theatre in Perry in a play called Arsenic and Old Lace. He played a dead body. It was a highlight of his life!

Much to his family’s dismay, he knew someone everywhere we went. And if he didn’t, he would always make a new friend. Many vacations were spent waiting for him to finish talking to a friend he had run into. He loved people and having conversations.

Chris LOVED rocks. His passion began one snowy day when his wife gave him a rock tumbler for Christmas. He couldn’t wait to use it! It ran for six weeks straight “tumbling” in the basement, echoing through the whole house. Night and day. We might not have enjoyed this new hobby, but it became something he loved researching and studying and was always looking for the next cool “rock.” Many of our trips consisted of stopping at rock shops all over the state. It also gave him one more thing to talk anyone’s ear off about.

Chris was a lifetime member of the Brigham City 4th Ward, with a few years break in the 10th Ward where he met some of his lifelong friends. He loved his home and his neighborhood. He served in many callings in the Young Men, Sunday School, Gospel Doctrine, and as a member of the Bishopric in the Singles Ward. He loved teaching and sharing what he knew with those he loved.

He is preceded in death by his mother, Bonnie and his beloved grandparents Jim and Fern Brown. We wish we could’ve been there to see their sweet reunion.

In honor of him, please wear blue or purple. Because as we all know, he either bled purple for Box Elder or blue for his Dodgers.

We want to thank all those who have helped us care for our dad, especially Jody, Sue, Alexis, Byron, Elyse, Julie and Dr. Jeffrey Lish. You have been angels and a blessing to us when we needed you. We love you and won’t ever forget your compassion and kindness.

Condolences may be expressed to the family at www.myers-mortuary.com.