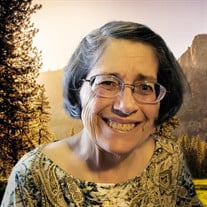 Marleen Cowley Andersen, 68, returned home to her Father in Heaven and Savior on May 13th 2021 in Roy, UT after a battle with esophageal cancer. She was born April 20th 1953 to Duain Hughes and Velda Seamons Cowley.

She attended elementary school at Benson Elementary, middle school at North Cache and high school at Sky View high. She grew up in Benson Utah on the farm. She loved working on the farm and with her father. She also loved horses and sewing. She had many good memories of growing up on the farm that she would share with her family and friends often.

While attending Sky View she met and dated Brad Johnson whom she married after graduation on February 25th 1972. They divorced a year later and during that time she started working at Pepperidge Farm. While working at Pepperidge Farm she met Bruce Andersen and they got married August 26th 1977. Bruce had 3 boys from a previous marriage, which she took in and helped raise. After getting married she continued working at Pepperidge Farm for a few years and then she started working at Sybil and Fabric in Preston, ID. She loved sewing and really enjoyed working there, most of her paycheck would go towards buying more fabric for her next project. While working at Sybil’s she and Bruce had five children. After a few more years her and Bruce got a divorce, and she became a single mom. Even though she was divorced she still maintained great relationships with her stepsons.

After becoming divorced she spent her time raising her children in the LDS church in which she served very selflessly. She loved gardening and cooking and spent a lot of time in her yard. She also spent time teaching her grandkids how to cook. Everyone loved her Texas cake and would request that she make it often.

She loved people and loved to serve and help others, especially her family. She took care of her grandchildren often and gained very close bonds with them. When her mother had a heart attack, and she did not feel like it was safe for her to be on her own anymore, she had her mother come live with her and she took care of her for 12 years before she passed.

Later in life she chose to walk away from the LDS church and started fellowshipping with some groups whom she grew to love, and she created many dear friendships from those interactions.

She is preceded in death by her parents, Duain Hughes Cowley, and Velda Seamons Cowley, her son Curtis Andersen and his wife Tami, and step son Kevin Andersen .

She is survived in death by her children, Justin (Jamie) Andersen, Jennifer (Travis) Staten, Chad Andersen, Angela Swenson and her 13 grandchildren.

Funeral services will be directed and held at Cache Valley Mortuary at 11 a.m. Thursday May 20th.

Interment will be held following the funeral at Logan City Cemetery.

The family would like to thank Canyon Home Care & Hospice for the excellent way in which they helped care for her. Our family is also grateful to all the family and friends who have shared their love with our mom.