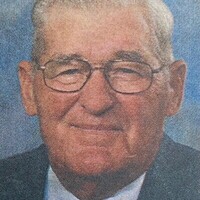 Donald Swenson Vaughan was born January 4, 1925 in Malad, Idaho to Donald Williams Vaughan and Gladys Azalia Swenson Vaughan. He passed away May 2, 2021 at Nell J. Redfield Memorial Hospital of causes incident to age. He was 96 years old.

Donald spent his youth in Arbon Valley working on the family homestead. He was baptized in the hills went of the valley in Lake Canyon in very cold water formed from melting snow. His father passed away at the age of 39 leaving him to care for his mother and 2 sisters at the age of 13. He attended schools in Arbon, Preston and graduated from Malad Highschool. He married Marjorie May Laws on September 21, 1944, later solemnized at the LDS Logan Temple August 8, 1955. He served in the U.S. Army during WW11 at Camp Roberts California and on the island of Saipan. Over the years he was employed by Crowther Bros. Milling Co., Union Pacific Railroad and U&I Sugar CO. He farmed and ranched in Cherry Creek, Pocatello Valley and Arbon. He was well known throughout the region as a cattle buyer/seller, earning the trust of many he dealt with as he was often times the only one in the scale house during transactions.

He served in several capacities in the LDS Church including Sunday School Superintendent, Bishop of the Cherry Creek Ward and as High Priest Group Leader. He and Marjorie also served as Stake Missionaries. He was a member and chairman of County ASCS Committee and served twice on the Oneida County School Board both times as chairman.

Donald and Marjorie celebrated 68 years of marriage in September of 2012. Due to declining health, Marjorie passed away December 31, 2012. He was also preceded in death by his parents and both sisters.

He is the father of 3 sons, Steven of Malad, Sherman (Judy) of McCammon and Sheldon (Janice) of Malad. Donald has 8 grandchildren and 20 great-grandchildren.

Internment will be held at the Malad City Cemetery with military rites by the American Legion, Ernest W. Jones post #65.

The family wishes to give heartfelt thanks to the staff at Nell J. Redfield Long Term Care Center for their kind and loving care given to our father.

In lieu of flowers, please make donations in Donald’s name to the Oneida County Education Foundation.