Dozens of parents, family members and community members showed up in support of LGBTQ+ students at Ridgeline High School on Wednesday, April 14, 2021.

MILLVILLE – Dozens of parents, family members, and community members showed up at Ridgeline High School Wednesday afternoon to show support for LGBTQ+ students. The show of support was in response to a viral video which showed a Ridgeline student cutting down an LGBTQ+ flag in the school’s commons area amid cheers of support from other students. This week the school is celebrating Diversity Week and had flags of multiple countries on display. 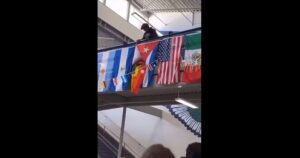 On Tuesday, the flag was temporarily placed over a Cuban flag for a meeting of the Gay Straight Alliance and was intended to be taken down after the meeting. However, another student took it upon himself to draw a knife and cut down the LGBTQ+ flag and let it fall to the floor. In the viral video, multiple students are heard cheering as the flag is cut loose.

“The Cache County School District is aware of an incident at Ridgeline High School which occurred at the end of the day on April 13th, when a Pride flag was hung over the top of a country flag during a GSA event in the student commons,” the district posted on its website Tuesday evening. “This flag was subsequently cut down by a student who was not part of the event.

“Neither the school nor the school district condones the insensitive and disrespectful removal of the flag, which was done without permission. In fact, this took place during Ridgeline’s Diversity Week, which is held with the intention to create awareness and celebrate the diversity of students, as well as increase inclusion among the Ridgeline student body.

“This type of incident reminds us of the importance of continually educating students, not just during a Diversity Week, on the importance of respecting one another and the right to attend school, participate in events, and learn in a safe and respectful school environment.”

As school let out on Wednesday, dozens of parents, family members and community members were seen waving pride flags, displaying signs with messages like “You Are Loved”, “UR Worthy”, and “Love All Neighbors.” Additionally, there was a large police presence as multiple representatives from the Cache County Sheriffs Office were on the scene to direct traffic and keep the rally on the sidewalk west of the school.

As students left the school and pulled away in their own vehicles, many honked horns in support of the parent rally. There were also a few seen giving thumbs down as they drove away.

All of the country flags which had been displayed in the school’s commons area earlier in the week had been removed by Wednesday morning.

The following photos from Wednesday’s rally were taken and shared by Mykel Winn. Dozens of parents, family members and community members showed up in support of LGBTQ+ students at Ridgeline High School on Wednesday, April 14, 2021.