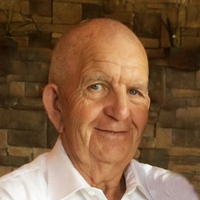 He grew up in Grace, Idaho with 4 of his 5 siblings, Bonnie, Dianna, Edwin, Lynn and his mother. He had a special bond with his mother and sisters.

His young life was hard. His parents were divorced when he was 2. At 3 years of age, he remembers watching from across the street as his family home burned to the ground.  Thankfully, his grandfather purchased two small homes and combined them to create his boyhood home.

When dad was 14, all of his teeth were pulled, a result from the kidney illness when he was 6.  He went without teeth for 6 weeks and then on Christmas Eve received a new set of teeth.  The faces he could pull without those teeth! Hilarious!

At 16, Dad joined the National Guard. He pestered, hounded, and talked his moms ear off until she finally relented and signed papers that allowed him to be sent to basic training even though he was too young. Ten days after his seventeenth birthday, he was in Fort Ord, California. He spent two and half months there, came home for two weeks, then spent 4 months at Fort Still, Oklahoma. Only then, did he return home and go back to high school to finish his senior year. Later, he served for another 6 years in the National Guard.  He came close to signing up for active duty during the Vietnam War but decided against it because he had started his family and had two children by then.

Mischief ran thick in his veins. Especially as a teenager!  Just ask Duane James. Oh, the stories they can tell; the starting pistol, the bag of fiery cow manure, the goat, and the list goes on.  He was a prankster; you might find a finger poke in your sandwich, or even extra things in your sandwich, like a miniature candy bar.

His first date with his future wife was a blind date.  They dated for a year and were engaged on March 7, 1966.  Gerald and Cynthia Meredith were married in Downey, Idaho on June 24, 1966.  Their marriage was sealed in the Logan Temple on June 4, 1969.  Four children were born to their union, Kent, Christine, Lisa and Barbara.

When mom became pregnant with their first child, dad worried and feared that he would not know how to be a good father. But in this area, he excelled! Nothing meant more to dad than his family. His commitment, love and devotion never ended. We always had adventures and those adventures were more about spending time with us than whatever we were doing. Then, grandchildren came along, and his heart grew tenfold. Tyler was the first and began to call Dad, Paka, and Paka it was. Now, everyone in the family refers to Dad as Paka.

He could sniff out a trinket from here to China. We could stock a store with flashlights, pens, and utility knives. Not to mention the little backscratchers, coin purses, sharpies and little paper tablets. And TOOLS! He loved his tools! Oh, and don’t leave out the chocolate; Chocolate Cake, Candy Bars, Ice Cream, Donuts, Lindor Truffles, and any Hostess Cakes. Okay, just sweets in general. After all, his motto was “Eat Desert First”.

If anyone knows Gerald, they know that he can WORK!  This man loves it! His first job, milking cows, was when he was just 7 years old. Then, at 9, he started moving sprinkler pipe. At that tender age, he worked to help support his family and help his mother. Many jobs followed. Later in life, he worked for Lew & Dan’s Grocery and then as a custodian for the Church of Jesus Christ of Latter-Day Saints. Whatever the job, he was dedicated and put his whole heart into it. He valued a job well done and liked to see what he could accomplish in a day. This is a trait that he instilled in each of his children. We did this by working side by side. He made it fun and enjoyable. We could not tell you have many cords of wood we have cut and hauled together over the years.  But oh, the memories!

Dad has a testimony of the Gospel of Jesus Christ, served in many callings and loved the Lord. He loved God’s creations, the outdoors and animals. Over the past few weeks, he has expressed his testimony of the power of prayer and the Atonement of Jesus Christ. He has been refined and purified and expressed that in his daily acts.  We understand and know more of the depth of God’s love for us because of how he loved his family. Thank You for your example and devotion.

Tall, at 6’2”, with dark hair, broad shoulders and those hands, massive strong hands. He was a bear of a man, strong and athletic. But those hands, even though he was missing part of a thumb and a pinky with a skin graft and several fingers no longer flexible due to a severe injury, they have shown us a massive amount of work, of care and devotion, of service and sacrifice. Those hands have served and loved, hugged and consoled, tickled and played. Those hands have created his little works of art and shown us his creativity. Those hands have shown us his gentle spirit and tender heart. Those hands will be missed beyond measure. And in a future day, those hands will be ready and waiting, with open arms, to greet and embrace, love and console, work and serve, play, cause mischief, create and love.

He is preceded in death by his mother, Caroline, and sisters, LaRae and Dianna. He is survived by his wife, Cynthia and 4 children, Kent (Heather) Crossley, Christine (Verl) Jarvie, Lisa (Dale) Hargraves and Barbara (Kayak and Packer) Crossley, 10 grandchildren and 5 great-grandchildren.

Burial will be in the Fairview Cemetery, 99 West Center Street, Soda Springs, Idaho with Military Honors.

Masks are required for attendance at services, thank you.