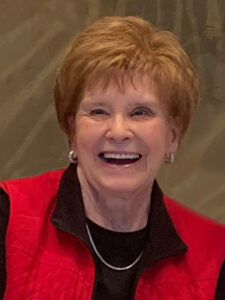 Our beautiful, kind, radiant, mother, Patti Buehler Johanson, passed away peacefully with loved ones by her side on Monday, March 29, 2021 at the age of 86. She had an active and independent life until she suffered the effects of a sudden stroke.

Born in Ogden, Utah on January 27, 1935, Patti was the first of 4 children born to J. Clyde and Eleanor Stevens Buehler. She was nurtured in a loving home with amazing parents and siblings whose bond remained strong her entire life. She graduated from Ogden High where she made many lifetime friends. For years one of her greatest joys in life was serving on reunion planning committees and the gathering of old friends. She had wonderful memories of her early, formative years.

After graduating from high school, Patti moved to Logan and attended Utah State University. There she met Carl Gibbs (“Skip”) Nelson. The couple soon married on July 10, 1953 in the Logan Temple. Skip joined the Air Force and they were stationed in Spokane, Washington at Fairchild Airforce Base. It was during that time they welcomed their first two daughters, Catherine (Cathi) and Jana, into their lives. After leaving the Air Force, the little family returned to Logan and Patti gave birth to another daughter, Peggy, who died in infancy. Soon after, they had their fourth child a son, Carl Darwin, (Dar). She was a fabulous, devoted mother who made sure her children knew they were loved and well cared for every day of their lives.

After their divorce, Patti moved back to Ogden to be close to family and to start a new life with her children. Her children were her number one priority and she sacrificed everything for them. She spent her life teaching them unconditional love, to work hard, and to always be their best. For over 20 years she worked as an assistant and office manager in several doctor’s offices and as the head secretary and assistant at Blaine Wadman Corporation. She was a master organizer and the model of efficiency and energy in everything she did.

It was during those years she met Norris Gail Johanson, (“Norrie”) and they were married on December 11, 1970. They were later sealed in the Bountiful Temple in March of 2000. She openly welcomed Norrie’s daughter Elise which made their family complete.

Patti and Norrie had a wonderful life together for almost 50 years. She was a loyal, devoted wife. Norrie was an owner of Patio Springs Country Club and they had a fun -filled social life with many friends. They were active members of the Church of Jesus Christ of Latter-day Saints and served in many capacities. Patti would often say that her Primary callings were her favorite and she kept in contact with many children she taught. She and Norrie also served a mission in the LDS Dry Pack Cannery and once again she utilized her inherent organization skills to keep production of food storage and the coordinating of countless volunteers running at the highest degree of efficiency. They also served for many years as ordinance workers and shift coordinators at the Bountiful Temple; a calling they loved.

She had an amazing positive outlook on life. She ALWAYS had a radiant, beaming smile and joyous laugh that was contagious. She was fun, funny, smart, wise, and loyal. There simply aren’t enough happy words to describe her because she was always happy. She was loved and adored by everyone who knew her. She was particularly proud of her beautiful, growing family and her grandchildren were everything to her. She never missed a birthday, and made holidays, especially Christmas, unforgettable. She carefully wrapped amazing beautiful gifts for each of her nearly 70 family members each year. Family was everything to Patti, but friends were also very important. She never had an unkind thing to say about anyone and would make friends everywhere she went. Her friendships knew no boundaries and lasted a lifetime.

She was preceded in death by her husband Norris Johanson, parents, Clyde and Eleanor Buehler, a brother Joe Buehler, her daughter Peggy, son-in-law Paul Nielsen, and Tanner Nelson and infant grandson. What a joyous heavenly reunion this must be.

Services will be live streamed and may be viewed by clicking here and scrolling to the bottom of the page.