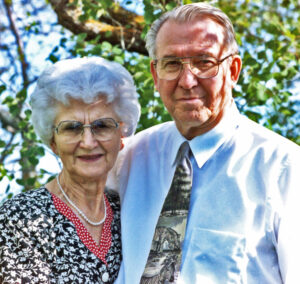 Douglas Oscar Crookston, the son of Newell James Crookston and Ethel Magdelene Smith, passed peacefully a couple of minutes after announcing that he was ready to get up for the day. He was 96 and in good health at the time.

Doug and Farris shared a wonderful life of raising and providing for a family during the 75 years since they met. Doug said when he first met Farris at the County Building where his father had an office as county clerk, he felt like he was going to have a heart attack, the feelings that welled up inside of him being so powerful and unfamiliar.

Both Doug and Farris were born and raised in the Logan, Utah area on family farms. Doug was born October 30, 1924 and Farris was born October 30, 1927. They were both of strong Church of Jesus Christ of Latter-day Saints immigrant backgrounds, being primarily English and Scottish. They lived the typical rural life. Farris was the youngest of 7 sisters: Lucille, Helen, Elvira (Elva), Myrle, Mavis, Marjeanne. Doug was the second youngest of his siblings and had one brother and four sisters: Ruth, Alice, Newell (Bud), Jane, and Ethel Mae. Doug and Farris outlived their brothers and sisters.

When Doug was a senior in high school, the United States entered World War II. After graduation from high school, he advised his parole board that he was ready to serve, and soon entered the Army on June 2, 1943. Crossing the Atlantic Ocean aboard the Queen Mary was rough on the young man whose feet had never before been subject to the instability of a ship on the open sea. Doug found that lying in the engine room, as close to the center of the ship as he could get, gave him relief from the discomfort that so many of his fellow soldiers were experiencing. Once in Germany he was deployed as a Technician Fifth Grade in the 472nd Field Artillery Group who calculated the trajectories for the cannon and mortar fire during battle and as a driver for his commanding officer. The Army awarded him the Bronze Star, a Devotion to Duty medal (the only one out of his unit of 150 soldiers), and other medals for his service.

After his release from the army on February 11, 1946, he returned to Logan where he met and subsequently married Farris on October 30, 1946. He then began studies at Utah State University. The couple had two sons, Kent, December, 1947, and Clair, November, 1948, and began to settle into married life. The Korean Conflict was underway when he enlisted in the National Guard. He felt that a married man with children, who had already served in WWII, would not be subject to being called up again. Doug spent a year in Korea. When he returned to his family, Clair, then about 3 years old looked at the strange man and asked Farris, “Mommy is this really my daddy?” Life resumed. Doug became a teacher then moved the family to California to work for Northrup Aircraft as an instructor. A third son, Ted was born October, 1956 and a daughter, Connie, February, 1958. After having lived in California for three and a half years they returned to Utah, and Doug resumed teaching school at Kaysville Jr. High. Their last child, Nick, completed the family on June, 1964.

One summer, acting on stories from some of their friends, the family took a summer vacation to Kenai, Alaska. Some of their friends had invested in salmon fishing and the family was intrigued. Before they left Alaska they tried to negotiate a price for a site, but it was not until several months after they returned home that a solid offer was on the table. They traded the offered lot to another fisherman for an adjacent lot that included a small cabin. They were finally fishermen with big dreams and expectations. It was not an instant success and many years saw them in debt to the local cannery as they returned to Doug’s teaching job in Utah at the end of the fishing season. It would have been easy to give up, but with Farris’s encouragement and Doug’s work ethic, they made that little investment a part of their family life, and a financial success for forty years. When a home teacher asked Doug if his family was having Family Home Evening, Doug replied “We have Family Home Summer.” Family was the focus of their life together. There were family projects, family holidays, family support, and family prayers. Doug became a family historian and wrote a biography of Henry Ballard, Farris’s great grandfather and early Utah pioneer. He also produced many slide shows, and with more recent technology, videos of their life events. Farris, affectionately known as “Grandma” to all who are blessed to know her, continues to be the heart of it all. She displays family pictures of her children, grandchildren, and great-grandchildren on her kitchen walls and cherishes a collection of birthday and anniversary cards she has received from them for their last anniversary.