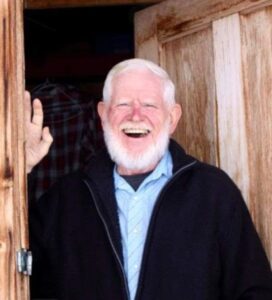 He was born September 28, 1947, in Hailey, Idaho, to Don and Mary Dilworth. He was the third of nine children, “a fiery redhead!” He spent his younger years ranching and helping his family, during which he lost half of his thumb in a farming accident. His thumb was often known as his “nubby,” which provided years of laughter and joy in the form of “magic thumb tricks,” or pain to those who needed reform.

From 1966 to 1968 he served a mission in Northern England for The Church of Jesus Christ of Latter-day Saints. He loved The Church and its members, often making many life-long friends wherever he attended.

After returning home from his mission, he took a road trip to Ricks College for a blind date, where he met Susan (Suzy) Oertli, “a spunky Canadian” who became his forever sweetheart. They were married in the Cardston Alberta Temple on May 16, 1970, and have spent the last fifty-and-a-half years building a beautiful life together. Ferrel and Suzy were never far apart, always doing life together through the highs and the lows as best friends and soul mates. They have an abundant posterity of 11 children, 38 grandchildren, six great-grandchildren, and sons and daughters-in-law whom they love as their own.

Ferrel loved people, serving, and helping those around him. His true passion was his wife, children, and grandchildren. Ferrel and Suzy always made family a priority and traveled to attend every birth, birthday, baptism, ordination, graduation, wedding, sporting, or other special life events. You could always count on Ferrel’s big bear hug, letting you know that he loved you. In the last year of his life, following the loss of his voice, his brilliant mind and sense of humor never died. His quick wit and crooked smile, accompanied by his boogie-board notes and “thumbs-up,” provided a gateway to his endless ingenuity and love.

Ferrel was a “jack of all trades,” there was little that he could not do if given the time and space to create. His career path spanned from banking, farming, wood refinishing, custodial, asphalt, and reserve police officer, which ultimately led to him returning to school at the age of 42. He attended Idaho State University and became a Certified Dental-Lab Technician. He loved making dentures and other devices to give people beautiful teeth and restore their smiles. As the onset of ALS impacted his hands, he was quick to modify his tools and crafting procedures to continue his work of restoring smiles.

Ferrel and Suzy spent a lifetime learning natural medicine, including the birth of 7/11 children at home. They loved to grow amazing, beautiful gardens, the bounty of which was canned and stored for feeding and sharing with all who were lucky enough to dine with them. He loved the outdoors, which included camping, adventuring, hunting, hiking, and getting firewood. Night’s camping was always filled with songs around the campfire, teaching us all to harmonize. He spent 30 plus years in Scouting, serving in multiple roles, primarily as a Scout Master. He took the young men through any mountain range he could find, even a fantastic trip to Canada through the Belly River. He loved the young men and had a fun, inspiring personality that they loved.

He was preceded in death by his parents Don and Mary Dilworth, and his older brother Don Evan and brother-in-law Rex Lee.

A special thanks to the Encompass Hospice Team and especially Nurse Kebra Holsten, and Dr. Meissner for taking such great care of Dad.

He will be greatly missed, and just as in life, he died with his boots on, prepared for his next adventure. Ferrel lived by and often shared the words of William Ernest Henley’s Invictus “…It matters not how strait the gate, how charged with punishments the scroll, I am the master of my fate, I am the captain of my soul.” He lived every day to his very best, and never let ALS rule his life.

Condolences and memories may be shared with the family at Colonial Funeral Home.