Republican Senate President Stuart Adams looks on from the Senate floor, Friday, Feb. 26, 2021, in Salt Lake City. The Legislature passed a nearly $100 million package of tax relief bills involving families with children, veterans and older residents receiving Social Security. The bills were supported by Adams and House Speaker Brad Wilson. They came after new revenue estimates showed that lawmakers had an additional $1.5 billion to spend this year because the economy is improving faster than predications despite the pandemic. (AP Photo/Rick Bowmer)

SALT LAKE CITY (AP) — The Utah Legislature is wrapping up its business for the year Friday. Lawmakers have already tackled a number of issues this year during a session that was conducted partially remotely because of the coronavirus pandemic.

Here’s a look at some of the big issues this year: 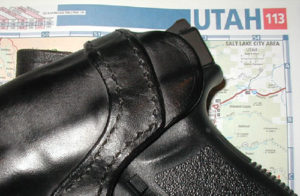 Gun owners no longer need a permit to carry a concealed gun in Utah under a bill that easily passed the GOP-dominated Utah Legislature and was quickly signed into law.

The state had previously required people to take a weapons course, undergo a background check and get a permit to legally carry a gun in public hidden under a jacket or inside a purse.

Utah was at least the 16th state to allow permitless carry, and several other states are considering similar measures backed by gun-rights groups like the National Rifle Association.

A push to ban transgender athletes from girls sports teams in Utah passed the state House this session, but it was halted in the Senate after the governor raised doubts.

About two dozen other states are considering similar bills this year. Opponents say they discriminate against an already marginalized group and run counter to an executive order from President Joe Biden. Supporters say transgender athletes can have advantages over other girls and the measures would even the playing field. Officials say there are no transgender athletes playing high school sports in Utah.

A separate bill that would have restricted gender-confirming medical care also died in committee this year.

Lawmakers passed a watered-down version of a bill that could change the name of Dixie State University.

The name is considered offensive because it’s associated with the Deep South and slavery. A plan to change it passed the House. But it stalled in the Senate until students from the southern Utah institution staged a protest at the state Capitol.

The version of the proposal that passed the Senate on Wednesday would require the name to be reconsidered next year but allow the option of keeping it. Several Republicans voiced concerns that the legislation is a product of “cancel culture” gone too far.

Dixie is a regional nickname stemming from century-old plans to grow cotton by settlers with The Church of Jesus Christ of Latter-day Saints.

The bills were supported by Republican Senate President Stuart Adams and House Speaker Brad Wilson. They came after new revenue estimates showed that lawmakers had an additional $1.5 billion to spend this year because the economy is improving faster than predications despite the pandemic.

Most of that money, though, was one-time cash and not available for next year’s budget.

The legislation for facilities that treat teens with behavioral and mental health issues gained final approval in the House on Tuesday and is headed to Gov. Spencer Cox for consideration.

The proposal would require more government oversight of youth residential treatment centers and documentation for when they use restraints. It would also prohibit treatment centers from using sedation or mechanical restraints without prior authorization.

Hilton testified she was abused mentally and physically at a Utah boarding school, where staff members would beat her, force her to take unknown pills, watch her shower and send her to solitary confinement without clothes as punishment.

Police in Utah may soon be banned from releasing mug shots until a person has been convicted of a crime under a bill that passed the full Legislature this week.

The Utah Senate unanimously voted in favor of the bill Wednesday that aims to make mug shots a private record to limit their impact on people’s lives — especially for those who are falsely accused or never found guilty.

The Associated Press is a member of the Utah Media Coalition, which has raised objections to the mug shot proposal.

The bill now moves to the governor’s desk for consideration.

Florida, Delaware and North Dakota introduced similar measures this year after Illinois passed one in 2020.

Eppolito is a corps member for the Associated Press/Report for America Statehouse News Initiative. Report for America is a nonprofit national service program that places journalists in local newsrooms to report on undercovered issues.