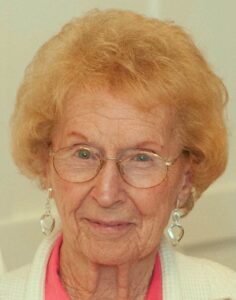 Our beloved mother, grandmother, “Grandma Great” and sister, Cleo W. Rasmussen Crockett passed away peacefully due to heart failure on Thursday, February 25, 2021 at the age of 92.

Cleo was born in Preston, Idaho on September 10, 1928 to Ivan Jacob Rasmussen and Martha Elmina Wilde. She was the youngest of seven children. She married her sweetheart, DeRay G. Crockett in the Logan LDS Temple on January 4, 1949.

Cleo was basically a pioneer in her early life. Her dad was a farmer, so she grew up on a farm, doing the tasks and chores that farmer’s kids do. She milked cows, fed pigs and cleaned their pens, gathered eggs, plowed fields, planted and harvested crops, rode horses, chopped wood, and, being the youngest, probably put up with a lot of prodding and hassling from older brothers and sisters. She was baptized in a river that ran by her farm home, Mink Creek. In the winter, they rode sleighs pulled by horses. They heated large rocks in the fire, then wrapped them in blankets to put on the floor of the sled to keep their feet warm.

She met DeRay when they were assigned to dance together in a Gold and Green Ball Mutual activity. They married and lived in Preston, Idaho, and Ogden, Utah. Then, in 1960, they moved to Bountiful to be closer to Hill Air Force Base where DeRay worked. That put them close to her sisters Norma and Hazel and their families, which was a great blessing in her life.

Cleo was always a faithful member of the Church of Jesus Christ of Latter-day Saints. Among the many church callings, she served faithfully in, her favorite was serving with DeRay for several years in the cafeterias of the Salt Lake Temple and the Bountiful Temple.

She absolutely adored her grandchildren and great-grandchildren. She was much more free with her resources after DeRay passed. If you knew DeRay, you probably know what that means. She loved blessing others on their birthdays and at Christmas. A few months ago, she got a cell phone and learned to have video calls with her kids and grandkids. Quite the accomplishment when you are 92 years old!

Since DeRay’s passing, Hazel was Cleo’s dearest friend. Before the pandemic, they saw each other often and even up to the day of her passing, they spoke with each other by phone, often several times a day.  Since they were both widows, their companionship was a huge blessing to each of them.

She is preceded in death by DeRay, who passed away in 2015, her infant son, Kim Ivan, and siblings; Earl, Woodrow, Thora, Althea and Norma.

The family wants to thank Cleo’s terrific neighbors and friends, her bishops and her ministering brothers and sisters who have richly blessed her life.

There will be a private family graveside service on Friday, March 5, 2021 in the Whitney Cemetery, Whitney, Idaho.

In lieu of flowers or gifts, please perform an act of service for a neighbor, friend or someone in need.