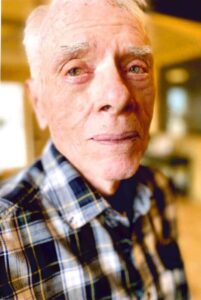 He was born in New York State where he grew up with his mother, Gertrude, his two brothers, Tom and Jack, and his sister, Pat.

He served his country in the US Army as a 1st Lieutenant during the Korean War. He was awarded three medals for his service.

After his discharge, he attended Utah State University earning a bachelor of science in Agronomy.

He started his career as a building inspector for LA County and worked his way up to building department head for the City of Pasadena.

After retirement, he moved to Grass Valley, California, where he spent 20 years before moving to Montpelier in the early 2000’s where he lived happily before moving into an assisted living facility in Pocatello.

He was married twice and had four children.

He was preceded in death by his wife, Diana, and two of his children, Jennifer and Timothy.

He is survived by his ex-wife, June, and two children, Victoria and Terrance, his grandchildren, and his great-grandchildren.

Joe was a lover of the outdoors, bird hunting, and fishing, and he loved to spend time camping, boating, and working on various “projects”. He will be remembered for his storytelling and great sense of humor.

He was interred in the Montpelier City Cemetery.