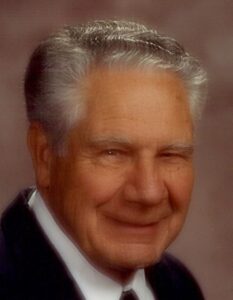 William Donald Nelson, at age 97, passed away on Tuesday, January 26, 2021 with his children nearby.

He was born in Logan, Utah, on January 4, 1924, to Alexander and Hazel Hendricks Nelson.

Graduating from high school in May 1942, months after the bombing of Pearl Harbor, he served in the US Army in both European and Pacific theaters through the duration of the war. At the end of the war he remained in the Philippines as peace-keeping efforts, where he was the pitcher for the Army all-star fast-pitch softball team, and won the boxing golden gloves award for US troops in Philippines. He was offered the opportunity to play professional fast-pitch softball after the war but turned down the offer.

After the war he met Julia Theresa Eames on a blind date, they loved dancing and were married on October 30, 1947 in Logan, Utah. Their marriage was later solemnized and their children sealed to them in the Logan Temple on February 14, 1963.

Taking up the family trade of plastering and cement work, he supported his family working in the construction industry until August 1963 when he started working at Hill Air Force Base in the Minuteman Missile Program as an electronic equipment technician. He later became an F-16 program manager until his retirement in June, 1986.

Don was known for his quite strength, kindness, cheerful attitude, sense of humor, steadfast faithfulness, continual service to others, strong love of family and devotion to the gospel of Jesus Christ. He served in many callings in The Church of Jesus Christ of Latter-day Saints, including Young Men President, Elders Quorum President, Bishop, High Councilor and a temple worker in the Ogden Temple where he served as a shift coordinator for many years.

He loves the outdoors, hiking, camping, hunting, fly fishing – anything to get him up into the mountains. Many of our favorite family memories are set in a campsite. Don loved to work with his hands, building two trailers, a wooden boat, two additions on his house, desks, chest of drawers, and much more and could fix anything. He was an accomplished auto mechanic, including rebuilding engines and cutting two cars in half and welding them together to make one working car. Don and Julie loved traveling and visited most of the 50 states, including driving to Alaska.

Don was preceded in death by his parents, all seven brothers and sisters, his wife Julia Nelson, daughter Judy Lynn Nelson, and son-in-law Paul A. Hogan.

Services will be live streamed and may be viewed by clicking here.