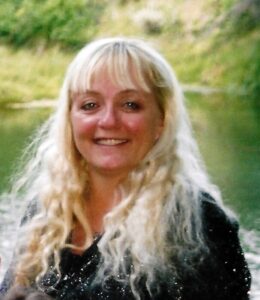 Marla Ann Nye McKinney (Mandy to her friends), 61, passed away in Pocatello, Idaho from cancer on January 26, 2021.

She was born May 29, 1959, in Montpelier, Idaho to Wayne Hymas Nye and Anita Evelyn Stucki Nye.

She grew up in Paris, Idaho and attended schools in Paris and Montpelier. Several years later, she took an online course and received her GED.

Marla married Robert (Bob) Charles McKinney on September 29, 1990 in Paris, Idaho. Bob was a long-haul truck driver. They traveled together in his truck for the first few years of their marriage.

Later, they bought a home in Dover, Deleware, where Bob’s parents lived. In Delaware, they started a trucking company, where Marla dispatched company drivers. After Bob’s death in 2009, she moved back to Idaho to be closer to family.

At the time of her passing, Marla was living in Pocatello and was employed at the Best Western. She was also a huge Dallas Cowboy fan.

She is preceded in death by her husband Bob, her father and stepmother Wayne and Gail Nye; a sister, JaNae Nye; and a niece, Bailey Marie Wells.

The family will meet with friends and loved ones Monday, February 1, 2021 at Schwab-Matthews Mortuary, 702 Clay Street, Montpelier, Idaho from 11:30am – 12:45pm. Funeral services will be held after the viewing at 1:00pm at the mortuary.