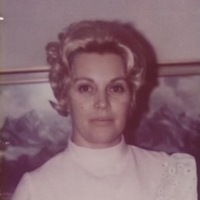 Gwen Sorensen Lewis, 94, passed away Monday, January 25, 2021 after a long and purposeful life.

On September 3, 1947, Gwen married Peirce Ammon Sorensen in the Salt Lake Temple.  After Peirce graduated from Brigham Young University, the couple moved to Malad.  Half of every year was spent on the family farm in Arbon Valley until Peirce’s death in 1979.

Gwen married Gail Lewis from Bountiful on July 1, 1983 and they made their home in Malad, Idaho.

Gwen was well known for her beautiful oil paintings, some of which have been displayed in church and public buildings in Malad.

She was active in the Church of Jesus Christ of Latter-Day-Saints often performing in singing groups at church meetings.

Her porcelain dolls and quilts won several blue ribbons at the state and county fairs.  Gwen taught for a short time at the Intermountain Indian School in Brigham, Utah and also as a substitute art teacher at Malad High School.

Burial will be at the Malad Cemetery.

Gwen’s legacy is the beauty she left in the world with her paintings and porcelain dolls.  She will be deeply missed by her family and friends.