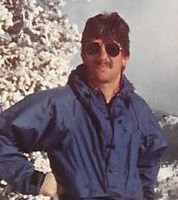 Tim was born on November 6, 1953, in Bellefonte, Pennsylvania. Tim was a 1971 graduate of Bellefonte Area Senior High School.

Tim was employed in the 80’s at the Utah State University as an Associate Director/Media Relations and as an assistant gymnastics coach. Tim then worked as a Vocational Rehab Counselor at Wyoming State Hospital until he retired, February 1, 2016.

Tim had a passion for all things outdoors. He was an avid skier at The Beav, and also enjoyed backpacking, running marathons, and camping. You would also find Tim with his buddy Dakota hiking and biking on the bluff. Tim loved his furry friends Jason, Shalako, Meisha, and Dakota.

Tim was preceded in death by his father, George Monsell. Tim is survived by his mother, Kathryn Monsell and his two brothers, Barry and Vernon (Winifred) Monsell of Bellefonte, Pennsylvania. He is also survived by his niece Monica (Mike) Musser and daughter Finley, and two nephews Charles (Tiffany) Haldeman and son Samuel, Matthew (Amber) Monsell and daughters Jayla and Riley.

A celebration of life will be held at a later time for friends and family.