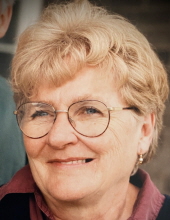 On Thursday, January 21, 2021, at the age of 83, Joyce Ann Martin Lund, of Shelley, Idaho, our beloved wife, mother, daughter, sister, grandmother, and great-grandmother, peacefully entered into the arms of our loving Heavenly Father.

Joyce was born in Preston, Idaho, on June 30, 1937, to Florence Burr and William Burton Martin. She attended Preston High School where she was a member of the G.A.A. club, Pep Club, FHA and Art Club. She attended Brigham Young University, and later received her B.S. in education at Utah State University.

She was a member of the Church of Jesus Christ of Latter-Day Saints where she fulfilled various church callings including a full-time mission with her eternal partner to the Connecticut, Hartford Mission. She lived a life sharing her Christlike attributes of charity, service, and dedication. Family always came first, and she taught by example where to find true joy and happiness saying, “If there is anything I hope to have taught my children it is that life is not meant to be easy; but it should be exciting, rewarding, and very fulfilling. What makes the difference in one’s life is their attitude”.

We are grateful for the plan of salvation and the knowledge of eternal families and we look forward to being with her again. “And no one can assist in this work except he shall be humble and full of love, having faith, hope, and charity, being temperate in all things, whatsoever shall be entrusted to his care”. D&C 12:8.

The service will be broadcast live (and recorded) on the Nalder Funeral Home Facebook page.

Condolences and memories may be shared with the family at Nalder Funeral Home.

Even though William and Florence Martin were older in years, their outlook was young and they showered their daughter Joyce with love and concern her entire life. Throughout her years, the relationship Joyce had with her father was one of close companionship; he never went anywhere without his little girl tagging along. She gained her love of horses through her dad. In her younger years, her father bought Joyce her first horse. On certain days, the school would allow the children to ride their horses to school and tether them in a pasture nearby. This was one of her favorite childhood memories.

Her brother, Glenn, served in World War II. She remembers her mother receiving a telegram from the army stating that Glenn had been wounded during the attack on Okinawa. A few days later, they received another telegram stating he had died. The ceremony with the folding of the flag, the playing of Taps, and the gun salute, all made a deep impression on her. Later in life, while teaching elementary school, Joyce would share with her 4th grade students this event in her life, cry a few tears with them, and then recite the pledge of allegiance. She knew that someday, she would have the opportunity which was denied her of knowing her older brother Glenn.

When she was in her teens, she was able to participate in the Preston Night Rodeo. This was one of her favorite activities on the warm summer nights with her best friend and their horses.

In June of 1957, her lifelong friend set her up on a blind date. Nothing would come of that date until January 1, 1958, when she and Daines Lund would meet up on a second date. In just a short 2 weeks, they were engaged. There were no doubts in her mind nor heart that he was “the one”. They both knew they had found their eternal partner. On June 26, 1958, Daines and Joyce were married and sealed for time and all eternity in the Church of Jesus Christ of Latter-Day Saints Logan Temple. For 61 years, they were inseparable and were always seen holding hands.

They lived in Salt Lake City, Provo, Southern California, and finally settled on a dairy farm with their 8 children in Lewiston, Utah. Our sweet mother always said that “The biggest advantage of living on a farm is the opportunity it provides of working together as a family”. Throughout Joyce’s life she had numerous jobs, but her real love was teaching. She taught 4th grade for many years at Lewiston Elementary where she shared her love of learning and reading with many students and developed lifelong friendships with her fellow educators. Daines and Joyce retired in Smithfield, Utah, and later relocated to Shelley, Idaho. During their retirement, they enjoyed traveling abroad. However, as family was always their priority, they made sure to fill their precious time with their children and grandchildren.

Heavenly Father was a great source of guidance and protection for both Joyce and Daines as they navigated the ups and downs of life together. We will forever cherish our parents’ example of grace, kindness, and charity as our sweet mother battled Alzheimer’s disease.

Joyce would like all her children to know that she loves her Savior and has a testimony that the Church of Jesus Christ of Latter-Day Saints is His church. As hard as life is sometimes, she never had a doubt of the divinity of Christ.