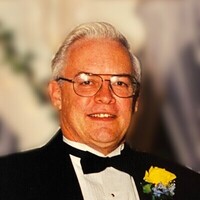 Eldred Lionel May, 77, passed away on January 20, 2021 at his home in Pocatello, Idaho, surrounded by his family.

He was born April 14, 1943 in Mount Clemens, Michigan. He was the oldest of 5 children to Howard Eldred and Mary Elizabeth (Gillespie) May.

The family relocated to Rupert, Idaho in 1951. Eldred attended Pioneer Elementary and graduated from Minidoka County High School in 1961.

He then attended Idaho State University, where he met his future wife Margo Lou Hill.  They married on July 21, 1962 in Grace, Idaho. Their marriage was later solemnized in the Logan, Utah LDS Temple in 1972. They made their home in Grace, where they lived for over 50 years.

During his lifetime, Eldred had several different occupations, but his favorites were working for Kaman Industrial Technologies for years, and driving for Doug Andrus Trucking Company.

He had many passions in his life. He enjoyed woodworking and building things. He was heavily involved in Cub Scouts for many years. He served for several years as Ward Clerk for the Grace 1st Ward. He enjoyed playing golf, church basketball, and softball. His greatest passion, by far, was his family, never missing an event or function.

Eldred and Margo are parents to two children: Robert (Cherrie) May of Poulsbo, Washington and Andrew (Whitney) May of Preston, Idaho. They have six grandchildren.

Eldred was preceded in death by his parents, two siblings; John and Curtis May. He is survived by his wife, Margo, children, grandchildren, and siblings Dori (Leon) Clegg of Burley, Idaho and Mark (Niki) May of Rupert, Idaho.

Because of limitations on gatherings, there will be a family service on January 30, 2021 at 11:00am at the Grace Idaho Stake Center located at 404 South Main Street in Grace, Idaho.

In lieu of flowers, please consider making a donation in Eldred’s name to the Grace Public Library.

The family would like to express their gratitude to Brookdale Senior Living facility and staff for their warm and caring treatment of Eldred during his stay with them.

Interment will be at the Grace Idaho Cemetery.