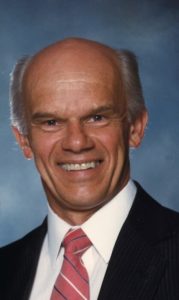 Our husband and father, John Madsen Wood, passed away 18 January 2021 in the presence of his family.

He was born on 31 August 1937 to John Wyatt Wood and Vera Odessa Madsen in Rigby, Idaho. His father died prior to his birth and he was raised by Vera and Tenneth West.

Dad was educated in the Rigby public schools and attended the University of Idaho and graduated with a Political Science degree.

He pursued a career with the U.S. Government and later, BankOne.

He met our mother Betty Howard when they both worked in Washington, DC. Dad often joked that he pestered mom for many months to go out with him while mom merely smiled.

Dad and mom married on 2 March 1963 in Arlington, Virginia and were later sealed in the Idaho Falls Temple for time and eternity.

He was a member of The Church of Jesus Christ of Latter-day Saints and served as a bishop in the Wellsville, Utah 1st Ward.

Dad and mom have five children: John Howard, Jodi Ann, Matthew (Nita) Howard, Luke (Jennifer) Howard, and Mark Howard, eleven grandchildren, one great-grandchild and another on the way. Dad is preceded in death by his father, mother, sister Vera Coleen, and beloved aunts and uncles.

Private family services are under the care of Myers Mortuary, Ogden, Utah.