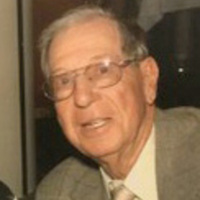 Leland Glen Hampton passed away at the age of 91 on January 16, 2021. He was surrounded by his loving family during his final moments.

Lee was born in American Fork, Utah on April 3, 1929 to Glen and Nola Hampton. He graduated from American Fork High School in 1947 where he participated in varsity track and basketball.

He then enlisted in the Navy where he served his country from 1947 to 1954. He was stationed in Germany, Guam and France. When he finished his military service, he went to work for Geneva Steel where he was a loyal employee for 37 years.

Lee married the love of his life, Lois Faye Peterson, in Elko Nevada on June 7, 1952. They were happily married for over 64 years. Together they had three sons, Leland Scott, Guy Lewis, and LeRoy P.

He loved spending time with his children and shared his love of baseball with them by coaching their little league teams and attending all of their games. He Instilled in them a love of the game, which he also passed on to his grandchildren. Even traveling to Florida to ensure he did not miss seeing his grandson pitch professionally.

Lee and Lois were avid bowlers. They participated in numerous bowling leagues where they competed together and individually for years. Long after Lee stopped bowling he, along with his close network of friends, continued to meet up frequently at the bowling alley to share conversation and a bite to eat.

He was preceded in death by his loving wife Lois, his son Scott, his parents, his brother; Richard “Dick” Hampton, sister; Barbara Hildreth, and grandsons; Don Hampton and Jeff Hampton.

Due to COVID, no formal service will be held. There will be a celebration of life sometime this summer.

Condolences and memories may be shared with the family at Wing Mortuary.