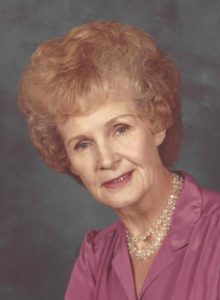 She was born in Taber, Alberta, Canada on February 3, 1923 to John Evan Evanson and Johanna Eorun Johnson, the 9th child of 10 children.

Ruth attended schools in her hometown of Taber, graduating from high school in three years. When she was 18 years old she volunteered to go to Northern Alberta and teach in a two room teacherage. She lived alone never seeing an adult for several months, only seeing the children, grades K-12, as they came out of the forest to attend school.

Ruth and her cousin Ethel moved to Logan, Utah in 1945 to attend college where she met her husband, Lewis Harding. They were married in the Salt Lake Temple on September 23, 1946. Lewis passed away in 1997.

They lived in the Harding family rock home built in 1869 by Lewis’ great-grandfather and Shadrack Jones.

Ruth and Lewis were the parents of 7 children. When their youngest child was 1 year old, she went back to college. She graduated with a teacher credential in 1968 and began teaching 3rd grade at the Willard Elementary school. She loved teaching and after 25 years she retired in 1986. She also tutored many children after retiring.

After retiring, Lewis and Ruth bought a motor home and loved traveling with friends to the southwest to enjoy the warm weather.

Ruth was very active in the Church of Jesus Christ of Latter-day Saints serving in many stake and ward positions. When she was 80 years old, Ruth and her sister-in-law, Helen Jane Lemon served a mission to Nauvoo, Illinois.

Ruth enjoyed community service including Lady Lions Club and Civic Club. She loved getting together with her friends in the Red Hats, DUP, book club and her many card clubs.

At the age of 77, she made her acting debut as one of the main characters in the Brigham City Fine Arts Theater in Arsenic and Old Lace. In her early 90’s she will be remembered for her one-woman comedy routine on the 4th of July talent show in Willard, entertaining the audience from her rocking chair. By many citizens requests she performed for several years telling her jokes on stage.

For her 90th birthday gift her family gave her a trip to her family’s ancestral home in Iceland accompanied by her daughter and husband, Lynette and Rich, her niece, Diane Paynter. It had been a lifelong dream for her.

In her spare time, she enjoyed reading, crocheting, painting, cooking, and canning. She enjoyed meeting and visiting with people as she sold home grown fruit and vegetables in front of her home in Willard.

She enjoyed traveling with her friends, Helen Jane, LaRee, LuDene, Frances, Carol and others to Lava, Las Vegas, St. George and many other places.

She was preceded in death by her husband, Lewis, her parents, one grandson, and 9 siblings.

The family would like to thank Amada Senior Care, especially Ginger, Jeanie, Meredith, Nia, and Dave for their loving care of mom, and Encompass Hospice especially Cheryl, Shawna, Kelly, Larry, Tonya and Shelby for their support.

Because of the COVID-19 pandemic, private graveside services will be held for mom at the Willard Cemetery.

In lieu of flowers you can donate to your favorite charity or pay it forward.

We Love You, Mom.