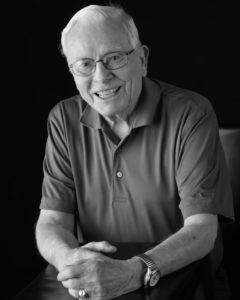 Our loving husband and father, Elgie Jonathan Hale, 94, passed away peacefully on January 18, 2021.

He was born April 19, 1926, in Blackfoot, Idaho, the son of Horace Hale and Delta Ivie Mangum. He served in the Naval Air Corps during World War II.

He was an outdoorsman and avid snow and slalom water skier until the age of 88.

He studied electrical engineering at Utah State University. He began his career at the Reactor Testing Station in Arco, Idaho. During his career, he was the holder of several patents. He also computerized the Lagoon Amusement Park and the Moroni Turkey Processing Plant in Utah. He was CEO of Hardy Scale Company in Ogden, designed large automatic battery chargers for Dugway Proving Grounds, designed the final checkout equipment for the Corvus Missile, designed a depth and altitude reader for the Neutralist Submarine, and designed an automatic material handling system for the defense depots of the United States. Elgie had the engineering responsibility to design an O-ring protection system following the space shuttle Challenger disaster. This system enabled the shuttle to be launched at cold temperatures. He flew to Kennedy Space Center and supervised the assembly of the redesigned O-ring protection system of the rocket motors for the next six shuttle launches. The rocket protection systems successfully flew without failure on 109 flights before the shuttle program ended. He retired from Morton Thiokol.

Elgie was an active member of the Church of Jesus Christ of Latter-day Saints. He served as Bishop of the Bountiful 32nd ward. He also served in several bishoprics and high councils and as regional director of the Name Extraction Program. In 1992, he and Vera Ruth served a proselyting mission in Ireland, and later a temple mission in London, England. He served as a sealer in the London, Ogden, and Brigham City temples.

Elgie’s services will be live streamed and may be viewed by clicking here.

Interment will be in the Brigham City Cemetery where military honors will be accorded by the Combined Veterans of Box Elder County Honor Guard.