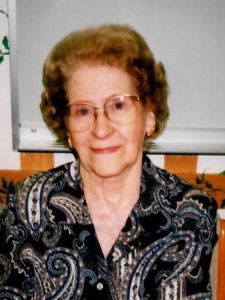 She was born November 16, 1920 in Elwood, Utah to Ramus P. and Dorthea Olsen Hansen.  She was the youngest of 17 children.  She grew up on the family farm where she picked apples and thinned beets.  She graduated from Bear River High School in 1939.

She met Cecil V. Hanson at the weekend dances at Crystal Hot Springs.  They were married December 4, 1939 in Brigham City, Utah.  They moved to Clearfield, Utah, and purchased a home in 1947, where they raised their four children.  Cecil died in 1984.  Norma continued living in their home by herself until she was 99 years old. (73 years total).

She is part of ‘The Greatest Generation’, keeping the home fires burning while Cecil served in the Army during WWII.  She has been amazingly resilient through several rough patches in her life, a house fire as a young child and two very serious car accidents later in her life.

She has lived a quiet, modest life, always taking care of her family and being sweet and kind to all.  She was predicted to have a long life, and reached the incredible milestone of 100 years of age.

In her younger years she enjoyed sewing, cooking, crocheting, crossword puzzles.  She won several blue ribbons at the Davis County Fair for her crocheted items.  Everyone in the family received a blanket crocheted by her, and especially every new baby.  She also volunteered many hours at the Clearfield Heritage Senior Center.

Norma was a member of the Church of Jesus Christ of Latter-day Saints.

Amazingly she lived on her own with very little help until the last 11 months.  Shortly after moving to The Family Tree of West Point, the COVID-19 restrictions made it so family could only visit her from a distance.  Our family would like to thank the staff at Family Tree and Brio Hospice for the excellent care given to our mother.

Private services will be held.