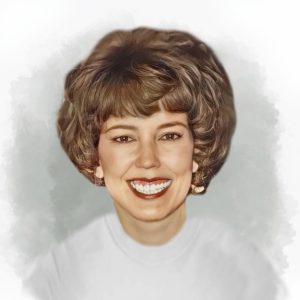 She was preceded in death by her parents Lloyd and Lila Whitworth, sister Susan Thackeray, brother-in-law Terry Thomas, a great niece and two great-great nieces.

Due to COVID-19 restrictions she had been unable to attend her son’s wedding or meet his first child, her youngest grandchild, so we think she found her own way to be able to visit him.

She was born September 25, 1956 in Brigham City, Utah and attended schools in the city her entire life, graduating from Box Elder High School in 1974. After high school she attended Weber State College in both the 70’s and 90’s.

She worked at Thiokol Corporation and McKay Dee Hospital for many years.

However her creativity was her true passion and she took up as many forms of art as she could over her lifetime. Her friends and anyone who met her remembers this as well as her unique sense of humor.

She married Thomas DeCarlo in 1977 and together they had two children and many animals and adventures. Although they divorced many years later, the DeCarlo family was still fond of her.

She later married Lane Petersen in 2005 and spent some happy years with him and his children. They were also later divorced.

Toward the end of her life she and Jerry Tolman had fallen in love and were planning for the future when she suddenly fell ill. They both lived in Maple Springs and were active in the LDS community there.

JoAnne was laid to rest in the Brigham City Cemetery on Monday, January 11, 2021 surrounded by her close family.

Her services are available to view by clicking here.

The family welcomes donations to the Utah School for the Deaf and Blind Education Fund in her memory in lieu of flowers.