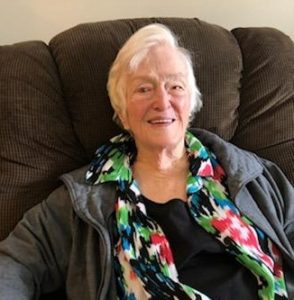 Patricia Ree MacKinney Snyder Buren, 88 of Preston, Idaho earned her angel wings Thursday, January 7, 2021. She was a resident of The Heritage Senior Living Home in Preston. She passed peacefully.

Patsy was born in Honolulu, Hawaii to Francis MacKinney and Flora Clement on August 13, 1932. She was the oldest child with 2 brothers and 1 sister.

Patsy married Raymond A. Snyder on April 18, 1953. This union produced 3 children Clarence Snyder, Ronald Alan Snyder, and Jerri Jensen. Raymond later passed away. Patsy aka the Tiger then married James Anthony on July 12, 1997. They enjoyed 23 happy years together before Jim passed away on August 20, 2020.

Patsy worked for Montgomery Wards for more than 10 years and then became the manager of the Yuba Sierra Grange Federal Credit Union. Her career spanned more than 20 years of service before retiring.

Patsy was a wonderful happy lady who was loved by all. She was very outgoing, friendly, considerate, and enjoyed doing service for others. Patsy loved the Lord and was spiritually fed by the Seventh Day Adventist Church.

Her favorite hobbies were sewing crocheting, genealogy, and doing dot-to-dot books. She also loved volunteering her time at Rideout Hospital in the Auxiliary, giving 20 years of service before moving to Idaho. Pat loved to spend time in the outdoors and camping was her favorite adventure. It didn’t matter where she was if it in the woods, by the water this filled her spirit and heart with happiness. Pat loved her children and grandchildren so much. She loved sharing their accomplishments and adventures with whoever would listen.

Pat joins her beloved husband Jim and a son Ronald Snyder in Heaven.

The family would like to thank the Heritage Home for the outstanding care that Pat received while there.

Pat’s last wishes were to be cremated and have her ashes placed along with her husband in Nampa, Idaho.

A graveside service with the family will take place at a later date.