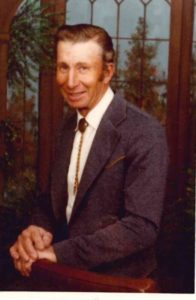 Calvin Darrell Smedley passed away January 7, 2021, at his home in Paris, Idaho.

He was born July 21, 1925, to Calvin Buck Smedley and Grace Ellen Poulson Smedley. He had 4 sisters, Violet, Cloree, Garna and Beverly, and two brothers, James and Thomas.

He was preceded in death by his parents, his sisters Violet and Cloree, and his brother James.

He served as a gunner in the US Navy, then attended college at Utah State Agricultural College, in Logan, Utah, where he earned a teaching certificate, graduating in 1951.

He rode for the Caribou Cattlemen’s Association for 33 years. He retired from teaching and spent the rest of his life raising cattle, farming, making saddles and doing leatherwork. He built over 200 saddles in his career as a saddle maker.

Services will be held at the Paris Cemetery for family only.

Burial will be in the Paris Cemetery.